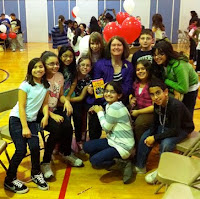 In honor of Dr. Seuss Day, March 2nd, I drove out to a school in Lodi, NJ and did a booktalk and readathon with the fourth grade kids. Every time I do a school visit, I am so very clear why I write for kids. Kids are amazing and fun and so pumped to read good stories!

To backtrack a little, the journey to Lodi was not an easy one. I was nervous about driving my Subaru, as it has some mysterious issue that makes it sound like a cross between a race car and an ancient jalopy. And it’s not the muffler—I had that checked already. Any minute the thing could’ve stopped in its tracks on the highway. To complicate matters, there was a detour on the route I was supposed to drive in on, and no signage whatsoever as to which alternate streets to take.

After a couple of pit stops to ask two very kind folks the way to the school, I chugged in five minutes before I was supposed to appear in the library.

Talk about sweating it!

But as soon as the kids filed in and I saw their eager faces, I breathed a deep sigh of relief and all of my angst dissolved.

I showed them my books, A Girl's Best Friend, Be Careful What You Wish For (I have a short story in this anthology) and Refugees. Then I played a “What if” game with them, where I had them imagine scenarios and characters, and build a story together, based on their brainstorming. They were great at naming the characters and thinking up contraptions for the main guy, who’s an amateur inventor. They understood that each of the three main kids had to have a distinct personality (rather than being too similar). They understood the need for conflict and action. I illustrated this by saying, "Wouldn't it be boring if Harry Potter and his friends sat around drinking juice and chatting instead of actively pursuing a quest? The kids thought this image was pretty funny. Indeed, they were very story savvy.

I think they appreciated having the story structure demystified. I explained that when I was in fourth grade I had plans to write a long book, with chapters. I would always get to around the third chapter and then lose steam, because despite my enthusiasm, I had no idea how to keep it going. In other words, I could've benefited from someone showing me how to construct a rudimentary story roadmap. Characters, plot, challenge, action, struggle, apparent defeat, resolve--you know the drill.

Anyway, the above photo is from my time at the Dr. Seuss Day. What fun!!!!

What do you do to celebrate reading on Dr. Seuss Day? On any day?

Posted by Catherine Stine at 6:08 AM