Today on Idea City I have two amazing features. The first is YA Reader Appreciation's Man Crush Monday, the brainchild of Tiffany Truitt, where each day for a week authors chat about interesting details of their books and characters. See the week's lineup here. Today I feature author Kate Jarvik Birch. (And Shannon Lee Alexander hosts me).
The second feature is Alex C. Cavanaugh's Underrated Treasures blogfest. The idea? Everyone has a favorite movie, book or band that no one's heard about. For whatever reason, they remain undiscovered and underrated. Now is your chance to tell the world about this obscure treasure! So let's get to them both, shall we?

Excerpt from Kate's futuristic YA novel Perfection with Entangled: 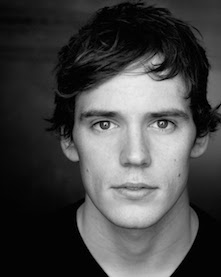 I hovered at the edge of the party near the pool house and watched as the guests orbited one another.
“They really went all out, didn’t they?” Penn walked up next to me wearing a crisp black tuxedo.
I stared. He looked handsome in this change of clothes, polished and refined. His father would be happy to see his son blending in so well with his colleagues. But this new version of him made me nervous.  It wasn’t until I looked up at his tousled hair and warm eyes that I relaxed, grateful that his new clothes couldn’t hide the real him.
In each of his hands he carried a long fluted glass. “I guess they don’t really get the concept of excess,” he said, handing one of the glasses to me.
I cradled the glass in my hand and took a tiny sip. The drink was utterly foreign. A million bubbles fizzed in my mouth. “It’s magical,” I said, looking out at the sparkling lights.
Penn smiled and stared at me before he turned to look out at the crowds of elegant people. Finally he looked back down into his own drink, where the bubbles climbed up the side of the glass like tiny strands of lights. “Sorry for being so cynical. Sometimes my parents bring out the worst in me.”
We stood silent for a minute, listening to the sounds of the other guests. Their voices were a soft hum, punctuated every now and again by the sound of laughter and clinking glasses.
After a minute Penn turned back to me. “You look different tonight. I’m sorry I didn’t tell you at first… when I came over. You’re really… beautiful. I guess I’m so used to seeing your hair down, but it’s really nice up like that.”
“Thank you,” I said, reaching up to touch the thick braid that wrapped around the top of my head. It was the same way I’d worn my hair for years in the training center, but it did feel different tonight.
“Do you want to go see the dance floor?”
“I promised your mother that I would stay toward the edge of things. She asked me not to draw too much attention to myself.”
Penn shook his head, as if he should have expected this from his mother. “It’s impossible for you not to draw attention.” He grabbed my hand and pulled me onto the grass. In front of us, the tent was alive with light and noise. A wide wooden dance floor had been laid over the grass at the other end of the tent, and past it, the band stood on top of a small stage pouring music out into the night.
“I really wanted to dance with you,” Penn said, frowning as he looked out over the crowded floor where his father stood talking with a large group of men.
The ceiling inside was covered with large lanterns, which reflected off of the glossy wood, and as much as I wanted to stand beneath them , I didn’t want to disobey the congressman’s wife.
I shook my head. “I’m sorry, Penn. I can’t.” Watching the sweet way his face fell in disappointment made me laugh.
“Oh, you think hurting my feelings is funny?” he asked.
“No.” I smiled, covering my face with my hands.
Penn turned his head away from me, but his smile was impossible to disguise. “Good thing I don’t give up easily,” he said. He pulled me around the corner of the tent and down the dark hill into the shadows. “We’ll just have to dance out here.”
With a quick flick of the wrist, he grabbed me again by the hand and drew me into his chest. My breath caught in my throat. After all the Dance lessons we’d been given at the training center, this was my first time dancing with a man.
A wild tingling spread through my chest, as if all those tiny bubbles in my drink had begun exploding inside me the moment he began to move me across the grass in a slow waltz. He wasn’t a great dancer, but his arms were firm, his hand warm and strong against my back. I leaned my head on his chest, letting myself breathe in the clean smell of his starched shirt and the lingering fragrance of the bubbly drink on his breath.

Kate Jarvik Birch is a visual artist, author, playwright, daydreamer, and professional procrastinator. As a child, she wanted to grow up to be either a unicorn or mermaid. Luckily, being a writer turned out to be just as magical. Her essays and short stories have been published in literary journals including Indiana Review and Saint Ann's Review. She lives in Salt Lake City, Utah with her husband and three kids. Visit her website, her Facebook page, Twitter
Also, check out her YA novel Deliver Me! 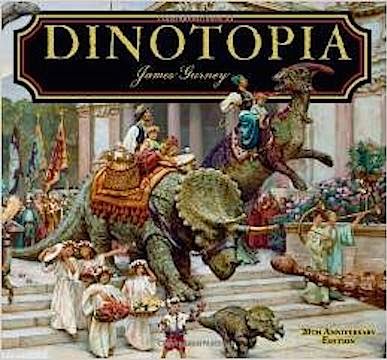 
I pick the book DINOTOPIA! I bought my copy of this lushly illustrated fantasy way back in 1992. It supposes that humans and dinos lived at the same time, and that we domesticated them, using them to ride on and help us do our work. Here's the Amazon blurb:
"When James Gurney's Dinotopia: A Land Apart from Time first appeared in 1992, it was immediately hailed as a fully imagined world of the caliber of J. R. R. Tolkien's. Gurney's premise — of an undiscovered island where a race of mystical humans co-exists in harmony with intelligent dinosaurs — has been since reiterated over and over in numerous films and by scores of other writers. Now, Calla Editions brings Gurney's spectacular artistry to a new generation in this 20th anniversary edition. Digitally re-rendered from the original transparencies, Gurney's dramatic panoramas of Dinotopia and close-up character studies of its inhabitants — both human and saurian — take on new vitality. And as a tale of high adventure and discovery told as entries and sketches in journal form, Dinotopia presents a shipwrecked visitor's glimpse into an imagined social order, a culture, and even a cooperative interspecies technology that will satisfy lovers of fantasy and science fiction of all persuasions. This edition includes a new Afterword written by author James Gurney as well as a special section of behind-the-scenes studies and maquettes he used in developing his paintings."

Cool, huh? See all of the Dinotopia books here. Then click here and scroll down to the fest links to read other posts about underrated treasures.
But first, answer me this: what's your fave underrated treasure? (book, film, band?)

Posted by Catherine Stine at 6:44 AM