great summer reads of all kinds!!!

Here is another one of my recommended summer reading lists with all manner of genres and subjects!

Christine Rains is back with Layers of Lace, the second installment of her hilarious and hot erotic Dice and Debauchery series. I read her first, Loose Corset and can't wait to dig into this one. The blurb:
Amateur cosplayer Emily Solis is determined to win the costume contest and the heart of her biggest competition. It isn't the first time Emily has shed her costume with the gorgeous Russell Morrison. Not even her best friend knows she's been having wild convention sex with him for over a year. It was supposed to remain physical, but Emily couldn't help falling for him and his kinky ways. In a moment of passion, she rolls the dice and tells Russell she loves him. He doesn't say it back. Can she convince him they're perfect together or will she roll another critical failure?
Pre-order or buy the ebook at Amazon, All Romance Ebooks, B&N, Kobo, or add it to your GR TBR list!

M Pax is here with Precipice, book 6 in her popular Backworlds space opera series. I've read two of them. Both were highly entertaining. Craze is quite the character, and there are many inventive touches in each book. The blurb:
In the far future, humanity settles the stars, bioengineering its descendants to survive in a harsh universe. This is the sixth book in the science fiction series, The Backworlds. A space opera adventure.
The Backworlds hang by a Quantum string, a thread about to snap. Annihilation is coming if Craze can’t stop it.
The genocidal alien he'd trapped breaks free, destroying a ship belonging to the Backworlds’ oldest enemy, the Fo’wo’s. The murderous alien wants to overtake the galaxy. The Fo’wo’s want another war.
The Backworlds’ best chance to survive is to overcome a century of hate and forge an alliance with the Fo’wo’s. Because of his history with the alien, Craze is recruited to represent his people. Now he’s the most hated man in the galaxy. The looming war will be a holocaust unless Craze can stop it, knowing salvation comes at a price.
Ready for a mini-excerpt? Sure, you are!
Until he knew for certain whether he dealt with one genocidal alien or two, Lepsi couldn’t think right. His thoughts refused to stand still, stuttering and churning.
The hatch slid fully open. He sprang off the cargo ejector, sailing two kilometers into the ether. He tumbled in the black for precisely twenty-three seconds then engaged his thrusters to journey the remaining twenty kilometers over to a spacecraft-sized mass of debris. The bits clumped together forming a weird metallic planetoid.

He traced along the char marks and the mangled pieces of hull. The answers he needed wouldn’t be found in this trash, yet he was closer to them here than anywhere else, unless he joined up with the horrid alien again. His limbs shuddered and his lungs struggled for breath. He never wanted to see the cloud-like ship again. He couldn’t. He’d crack into a billion unrecoverable pieces. Just like the rubble of the Fo’wo ship around him.
Buy the ebook at Amazon, B&N, iBook, Googleplay, Smashie, Kobo 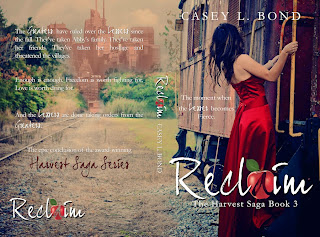 And now for a cover reveal from veteran indie author, Casey Bond, heading to UtopYA in a couple of weeks, where I will get to meet her. Yay! This new cover is Reclaimed from her Harvest Saga series. Isn't it pretty?! No exact release date yet but soon... In the meantime get started on the series now for FREE by ordering REAP, the first! To see all of Casey's ebooks, click here. The blurb for REAP:
The remnants of the United States of America have been divided. From five enormous, technologically-advanced cities, the Greaters rule over the Lessers.

In the Lesser village of Orchard, things are not as perfect as Abby Kelley thinks they are. When the apple harvest draws near and the Greater’s engineered fruits become too much for one village to handle alone, reinforcements from neighboring villages are called upon.
Having to choose between her best friend, whom she has no romantic feelings for, and mysterious newcomer Crew, Abby finds herself in the middle of a harvest that she had no intention of becoming a part of. She becomes involved in a situation that threatens the strict rule of the Greaters, and just might give the Lessers hope for a better tomorrow. But, can she help the Lessers without losing Crew? And if she chooses Crew, will she lose her best friend? 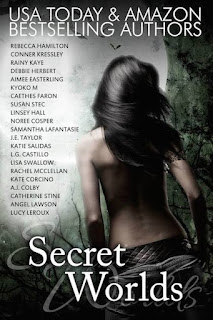 And here's one more amazing release! It's Secret Worlds, with 21 novels by 21 bestselling authors for a mere 99 cents!!! I am honored to have a novel in it - Ruby's Fire. Here are some provocative teasers featuring the various authors and their books:

"'Humans in the house!' came the call from the kitchen as we entered the first trailer. 'Put on some clothes.'" - from Shiftless by Aimee Easterling

“You’re probably better off without knowing your dad. Mine’s King Jackass.” - from the Pandora Principle by Noree Cosper

“Someone saw you get high. Do you?” he asks. “No, Oblivion is for deleting."   - from Ruby's Fire by Catherine Stine

"Another spell gone kaput." from Changeling by Debbie Herbert

"You don't get rid of an itch by ignoring it. There's only one way to settle it down. You scratch it, good and hard." - from Spark Rising by Kate Corcino

"Being human sucked much more than I remembered. The only thing that remained the same was the burn of a shot of whiskey and the way Naomi felt when we made love." - from Trinity Rising by J.E. Taylor

“My mom died during an exorcism on my eighteenth birthday.” - from The Forever Girl by Rebecca Hamilton

“I spread out like a shadow on pavement under the feet of the unsuspecting woman working her corner in the seven-hundred block of South Orange Blossom Trail. Her name is Jane, and I will be wearing her by morning.” - from Purgatory by Susan Stec

Happy summer reading, all!
Posted by Catherine Stine at 8:46 PM