I’m a fan of American Idol. I love music and seeing talented young singers work toward their dreams. With the lowered age level this year—now fifteen—the contest has accepted a spate of very dewy-eyed talent. Last night the judges cut down to the final 24 kids, including some super-sweet little fifteen year-old prodigies. I keep thinking that these stories could translate well to novel form. What would it be like for someone that untested to be in the spotlight, enduring that type of pressure, day after day? Or for the kids who were cut, what do they go back to? Bands who may resent them for trying to sell out? I thought about various YA novels I’ve read or heard about that feature musicians. Orpheus Obsession by Dakota Lane is an offbeat story about a girl, obsessed with a young rocker. Sarah Dessen’s This Lullaby is about a straight girl with a hippie musician dad who abandoned the family. When she falls for a wild indie musician her ambitious, clear-cut world is thrown into confusion. And Jon Skovron’s main character, Sammy in Struts & Frets is a struggling rocker trying to keep his band together long enough to win the battle of the bands.

After hearing that Mariah Carey and Beyoncé both sang for one of Gaddafi’s sons for a million dollars each, I envisioned a younger version of that scenario. How would a teen idol handle it if he or she was invited to participate in such a nefarious event? Or this: how will Miley Cyrus handle herself going forward, after being taped smoking from a bong and posing nearly naked? Have you come across any great YA novels featuring young musicians? Can you think of any musical scenarios you’d love to see played out in a story?
Posted by Catherine Stine at 7:24 AM 13 comments:

Labels: indie bands in YA, teen rockers in fiction, YA novels about music 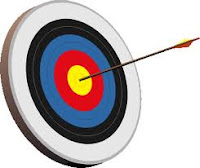 A few days ago, I was awarded the Irresistibly Sweet Blog Award by Kelly Hashway and since it’s a play-it-forward kind of award, I decided to go for it, and mention 6 blogs (Plus 2 bonus ones!!) that I really enjoy. Since it’s no longer Valentine’s Day, I’m taking the liberty to rename the award the On Target Award. Here's how it goes, should you choose to pay it forward:

1. Thank and link back to the person that gave this award.

3. Pass the award along to 6 other On Target blogs.

3. Staying up more than half the night

4. Traveling to vaguely dangerous places like Moscow, Camden, inner city Detroit and, on my wishlist: Afghanistan

(It was sooo hard to boil down the many blogs I follow. I couldn't list any used in other award lists):

1. Lauren Hammond’s Living in Literary La La Land. She’s a YA author AND an agent. Look! .

4. Susan Dennard’s Susan Dennard: Her banner alone is outstanding. But seriously, folks, she’s always discussing timely matters, such as Steampunk in lit. Check it out here.

6. Livia Blackburne’s, A Brain Scientist’s Take on Writing. I mean, what could be cooler than that? Livia has a unique view of books, writing, and the world. Read on.

7. BONUS BLOG: Ezmirelda’s Dreamz of a YA Writer. A teen, passionate about books, music and blogging. And she’s already written 5 novels in high school! Visit her.

8. OMG, I forgot one! Here's a bonus, bonus blog: David McGrievey’s An Illustrated Life. For any of you out there who are author-illustrators. David’s illustrations are some of the most elegant around. Yes.

CAMO GIRL, Kekla’s tween novel, just out with Aladdin, is the story of sixth grade outcast Ella. Ella finds herself caught between her old best friend Zach, who is increasingly lost in a fantasy world, and a beckoning popular crowd. Her dilemma: she can only fit in if she leaves “Z” behind.

This story is notable for what you chose to leave out as much as what you included. Can you speak to that?
Yes, I left out Z’s official psychiatric diagnosis, and the name of Ella’s skin condition, which created camouflage-like lighter and darker patches on her face. Her POV was such a close one, that I didn’t think it was realistic for her to know Z’s diagnosis. And it wasn’t crucial to the story that I focus on the nature of Ella’s skin disorder. I preferred to concentrate on the ways that kids deal with trauma. Thus, the title CAMO refers to her skin’s light patches; but also to the ways that Ella hides from her budding social life, and how Zach uses his fantasy world to avoid working through his family trauma. Even Bailey, the new boy, who helps Ella take a chance on getting to know the popular kids, has a secret he’s hiding from. *no spoiler here!*

What theme in CAMO GIRL would you most like kids to come away with?
The feeling of self-acceptance, coming to terms with both your strengths and weaknesses. Also, I’d like kids to consider what it means to be a friend: it may mean keeping a friend’s secret, only to reveal it in time. Ella thought that keeping Z’s secret was helping him, but she learned that it ultimately hurt him by preventing him from getting treatment. Also, by remaining “loyal” to him, she stilted her own social growth. Kekla has vivid memories of the tension of trying to straddle two groups, who did not necessarily like each other. That’s why she jokes that this novel could be called How to Choose a Lunch Table.

Regarding humor, I love the feisty grandma. How did you think up her awesome name?
Funny you should ask. I was on a road trip and brainstorming with my friend about what I should name her. I sprinkled Splenda in my coffee, and read the label out loud. My friend said, “Sounds like an old lady’s name, but you’d never name the granny that.”
“Oh, yeah?” I replied. “Watch me!”

Are you more of a realistic fiction author or what?
I’m writing for the child that I was, who wanted to know more about how to negotiate the real world. In that sense, I’m a writer of realistic fiction. I realize, though, that fantasy also describes the real world, in allegorical terms. So who knows? I may try my hand at another genre if it’s the best vehicle for my theme.

What’s up next for you? And how can your readers stay updated?
I have two books coming out in 2012. The first is a YA with Holt, called 37 THINGS I LOVE. The second is FIRE IN THE STREETS, a middle-grade companion book to THE ROCK AND THE RIVER, (ALA Coretta Scott King John Steptoe New Talent Award) published by Aladdin. Please stop by my website to say hello and get updates at: www.keklamagoon.com.
Posted by Catherine Stine at 8:58 AM 8 comments:

Recently, I attended the 2011 SCBWI Winter Conference in NYC. It's always interesting to hear about trends, publishing shifts, new editors and art directors, and learn from the veterans, such as illustrator and writer, Jules Fieffer, and editor, Patricia Lee Gauch. I love running into other writers I know, as well as meeting new ones. Since I tend to remember things in bullet points, I created a list. I hope some of these will amuse and inspire you too:

*RL Stine (Goosebumps series), reading fan mail from a boy: “Dear RL, I’ve read 40 of your books. Can I ask a question? Why are they so boring!” RL did a tour in China, as his books are now pubbed in Mandarin. He said that the bookstore in Shanghai was as big as a Walmart.

*RL Stine getting weepy when recalling how Ray Bradbury shook his hand and told him he would help a lot of people. RL confessed, “I never wanted to be a scary guy, I just wanted to be funny.”

*Sara Zarr YA fiction writer extraordinaire (Story of a Girl), revealing that it took her ten years of struggle, and three unpubbed novels, to finally break through.

*Patricia Lee Gauch veteran editor: “Picture books are horizontal events. Feel the swells, the waves. The idea should not come from your head. Don’t overthink.”

*Jane Yolen author of around 300 books (!!!!!) saying that, of late, she is getting some rejections, saying that her work is too literate! Translation: perhaps there is a trend away from lyricism?

*Editors showed more art text hybrids, which to me, is very exciting. These books have less illustration than graphic novels, but are a sort of extension of the Hugo Cabret concept.

*Jeanette Larson: “Editors and publishers used to bitterly complain about superstores like Borders, but now we are shouting that we hope and pray they’ll stick around.”

*Andrea Cooper senior editor at S&S: “I spend a lot of time on Amazon before pitching a book that I’m interested in. I’m researching whether there’s another book out there that’s too similar, or finding out whether a trend has reached its tipping point.”

*Jules Feiffer veteran illustrator (who, at 80, is as clear-headed and energetic as many 20 year-olds. He illustrated The Phantom Tollbooth): “If you show you’re angry, or ranting about an issue, you’ll turn readers off. Go through the backdoor and hook them before they know what hit them.”

*Jules Feiffer: “As you age, imagination often increases. There’s no end game in the creative life.”

*Sara Zarr: “Keep cultivating your imagination. The problems and holes in your WIP are always solvable.”

*I was happy to see my students at the conference—their first. They learned so much in two days!

There was so much more, but this list is getting long. Which of these really resonates with you? What was the one piece of advice you heard at a conference or event that has always stuck in your head?
Posted by Catherine Stine at 7:33 AM 13 comments: