Hi peeps,
I am super-excited to show everyone the cover of my new YA contemporary romance Heart in a Box. I have an animated version, too. Also, the official blurb, a party invite to my Facebook launch event, plus, most exciting: the 1-click PREORDER is LIVE.

Here's the cover and the blurb... 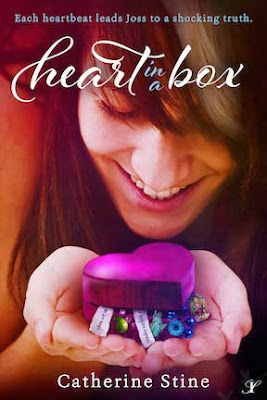 Each heartbeat leads Joss closer a shocking truth that will change everything.

Joss Olstad has finally talked her clingy, stoner mom into springing Joss from her stifling private school and into the labyrinth of a prestigious Brooklyn public high. Searching for “a way out, a way in, and something I can’t even put into words, yet” Joss longs to find missing pieces of herself she lost when the father she never met died on a faraway road in India. All she has of him is a painted box he made. Joss is also itching to escape the hippie hell of her mother’s bong shop, and the hypocrisy that is her life. With her honey skin, and long brown hair, she passes for white, even though she’s half Indian. This culturally diverse school will be her chance to find out who she really is.

Day one, and Joss is terrified by how different things are. Has she made a horrible mistake? Before long, she gets into the pace. Her sights are set on her own “Bobcat in black denim”, the tall, handsome Will Torres. She’s met Katya too, a popular glam queen, who’s a blast to hang out with. She’s even joined an Indian Culture Club, who invites her to live music clubs. Life is perfect!

Or is it? Her friend, Katya starts acting like a royal slut, her mom’s flinging insults and lies at her, and the Club girls are pressuring Joss to reveal her sketchy pedigree. Joss finds herself spinning stories about her past to fill in the holes. Even Will becomes leery of her. And the Personal Iconography class that Joss signed on for because kids claimed the teacher was “nuts in a good way” is the toughest class she’s ever taken. In it, Joss starts to make her own, heart-shaped boxes, with private messages in them. They help guide her forward. Not only is she forced to figure out who she is beyond the “nice girl” she always hid behind, her search leads her to the fringes of the outer boroughs, to a scary industrial section of Queens, and a shocking family secret that changes everything.

You've gotta see this cover! Plus great books for November

I met Katie John at Utopia in Nashville last summer and I've since become a fan of her novels after reading the second book in her Meadowsweet Chronicles about a witch clan. She's launching book three in March 2016. Want to see the cover right now? Sure you do! 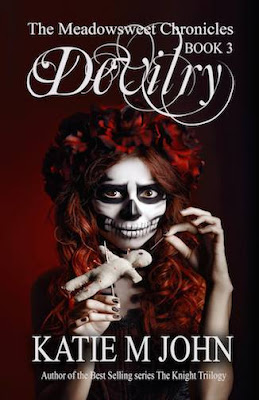 Something wicked has arrived in the sleepy village of Heargton, and the effects of its arrival have unleashed terrible paranormal entities long believed myth.
Forces of darkness are gathering, and the Meadowsweet sisters, (who are still scattered across the globe) are preparing for a terrible and fearsome battle.

The Ravenhearts, having made an enemy of The Southern Territories, have fled Mexico to Haiti in order to unlock the ancient secret of returning the dead. With a war about begin, the restoration of their trinity is crucial to their play for power and their bid to control the portal of The Ancient Ones.

For the broken hearted Jeremiah Chase, life at Coldstone House is a seemingly endless stream of dark family revelations. His discovery of a diary recording the activities of 'The Devil Dance Club' leads him into a corridor of evil that leads directly to his own ancestors.


Intrigued? Get book one and start catching up for the release of book three in March! Book One is available on Amazon worldwide in eBook and paperback
USA LINK, UK link
Book One is currently FREE on iBOOKS 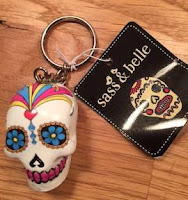 There's a giveaway, too! Enter the Rafflecopter to win this fabulous Mexican Day of The Dead key ring and Meadowsweet Chronicles goodie bag.

ABOUT KATIE
Katie lives in London UK, with two cheeky Mud-puddle fairies, and a handsome giant. She is author of the best-selling YA Contemporary Arthurian series, ‘The Knight Trilogy’ and the Upper YA series, ‘The Meadowsweet Chronicles.’ She writes dark fairy tales, horror and contemporary YA Romance.
Katie is now a full time author after having taught English in a London Comprehensive for over fifteen years. She is founder of Chapter.Con. London, a YA and NA conference for Readers, Bloggers and Authors. She is also founder of Little Bird Publishing, an ethical, indie press house.
More about Katie: Amazon author page, website and blog.

And now another cool read!
Would you enjoy following the journey of a feisty, utterly charming young couple - Bean the musician and Zak the whimsical sketch artist? How about time traveling back to the 1970s with an infusion of the music, fashion and general carny vibes, including a vicarious trip to the Fillmore to see a Grateful Dead concert? If so, Check out Christine Potter's beauty of a book Time Runs Away with Her.

Get it at Amazon, B&N
Here's my review of this book on Goodreads.

Mayhem in the Air is available everywhere!
Get it at: Amazon, Google Play, iTunes, Kobo, Nook, Smashie 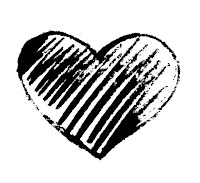 My YA contemporary novel, Heart in a Box launches on December 5th!!! Keep an eye out for the upcoming cover reveal in November and giant Facebook launch party on Tuesday, December 8th.

What do you have brewing this November?
Posted by Catherine Stine at 7:11 AM 14 comments: