Today Idea City is featuring a bunch of great new reads to upload and read under your warm, winter quilt. We have a fun variety of sci-fi, paranormal romance, and thrillers. 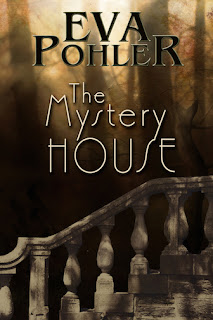 Ellen and her two best friends share a mid-life crisis by hatching a plan to renovate an 1860's Greek revival in the nearby historic district of San Antonio. Although Ellen isn’t one to believe in ghosts, she comes face to face with something inexplicable in the attic. Her ghost-enthusiast friends convince her that they must help the spirit find closure, and as they dig deeper into the past, they uncover a shocking history that someone in the neighborhood doesn’t want exposed. But Ellen and her friends don't give up easily. They realize they've been called to give voice to the invisible women who suffered behind the walls of the house for decades.

Check out The Mystery House at Amazon & Smashwords

Eva Pohler teaches writing and literature at a university in San Antonio, where she lives with her husband and three kids. She’s the author of several novels for teens based on Greek mythology, including her bestselling six-book Gatekeeper’s Saga and three-book Vampires of Athens Series. Learn more at Eva's website, her thriller Facebook page and her Teen Fantasy Facebook page. 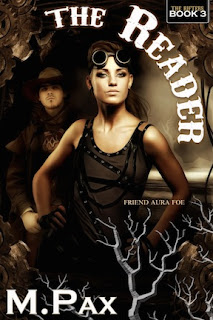 The Reader by M. Pax
science fiction (Book Three of the Rifter series)

With the rift closed for the season and no more monsters to fight, Daelin Long gets bored as librarian in the podunk town of Settler, Oregon. A job interview and her brother’s arrival present a tempting opportunity to escape, until her brother and her best friend, a ghost, disappear.
While Daelin searches for them, more mysteries pile up: dead people coming back to life, portraits of the town founders replaced with strange white trees, and people on the other side of the rift returning. It’s impossible. The portal that allows monsters from other universes to come to Earth is sealed until next summer.
The Rifters, a secret group protecting our world, believe the troubles are nothing more than the tantrums of an offended ghost. Daelin disagrees. If she’s right, the evil hell-bent on destroying Earth has new technology making the rift more deadly.
Before the monster summons the next apocalypse, Daelin must find it and destroy it.

Get the Reader at Amazon, UK, iBook, Kobo, Nook, Smashie
Check out the entire Rifter series!

M. Pax is author of the space adventure series The Backworlds, plus other novels and short stories. Fantasy, science fiction, and the weird beckons  to her, and she blames Oregon, a source of endless inspiration. She docents at Pine Mountain Observatory in the summers as a star guide and has a cat with a crush on Mr. Spock. Learn more at mpaxauthor.com. 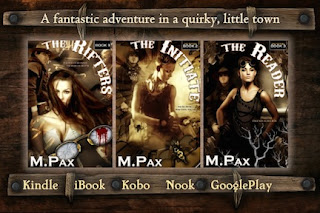 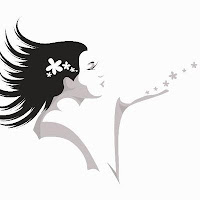 Angela Brown has a fabulous new release, Degrees of Being Boss out with her pen name Rayven Godchild. I can't show the cover here because this blog doesn't feature erotica. BUT... since she's a fellow Untethered Realms author and a very talented writer, I am posting the link to all of Rayven's books! Click here if you are adventurous, over 18 and seeking new reads.

Annnnnnd, Beyond Secret Worlds, an amazing short story collection is still FREE! My story in it, Blue House Magic, is the sequel set-up to Ruby's Fire.

Get it at Amazon, iBooks, Nook, Kobo


Reading is a great way to relax during the holidays! I've got my own kindle loaded up with a colorful array. You?
Posted by Catherine Stine at 7:42 AM 8 comments: 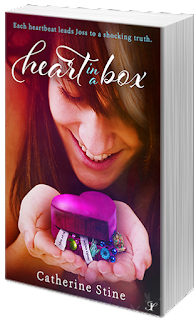 This week is the book blitz for Heart in a Box and the big Facebook party is tomorrow. There's still time to join the party. I will be giving away my handmade heart boxes with messages in them like my character Joss writes, and there's a lineup of great guest authors. Thanks SOOO much to everyone who is posting about Heart this week!!! I am very humbled by the response. I want to invite you all to enter the blitz Rafflecopter below. Prizes include a $40 gift card, signed paperback of Heart in a Box, signed paperback of Dorianna, ebooks of my Amazon bestselling YA futuristic thrillers Fireseed One and Ruby’s Fire, and a super-pack of very cool YA eBooks: The Danaan Trilogy by Howard, Changeling by Herbert and Drawn by Ledbetter.

Heart took a long while to brew and polish and it contains elements very close to my own heart: addicted family members, identity issues, a close, yet complicated mom - daughter relationship, creativity, healing through art, and of course, a sweet romance. Here is a mini-excerpt to get a taste of what I'm talking about. 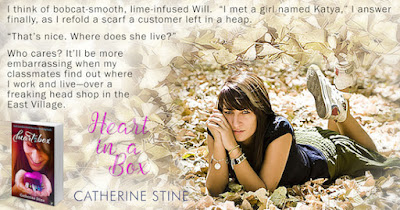 Thoughts on school veer off when I spot the box on my mother’s night table. The box. I know its black, lacquered form by heart. It’s the size of a large jewelry box. My father painted it with Bengali pink roses and a tangle of red cardinal vines. He must’ve used the tiniest brush, as if the objects inside were treasures—emeralds from Mumbai or silk doll clothes from Kancheepuram.
The box sits next to Mom’s organic remedies: tea-tree oil, Saint John’s Wort, aromatherapy ampules, zinc, monster-dose wheat grass capsules. She thinks these keep her functional. But I see how one accelerates her and the next slows her down, adding up to zero. The box is close enough she doesn’t even have to get out of bed in the morning. She can reach, with trembling fingers, light up and space out even before her first cup of black tea.
I crack open the box. Pre-rolled blunts sit like tainted royalty on a plush, purple pillow. Their sharp floral resin makes me sneeze.
Once when I was twelve, Mom offered me a doob after closing the store for the night. She claimed to be worried about how uptight I was getting. It was around the time when I was sprouting zits, boobs, hips and my period. Who wouldn’t be down in the dumps? Mom claimed that if I got stoned I might relax. “Cave women probably used it for cramps, before all these greedy pharmacists crawled on the earth, trying to sell Midol and Tylenol and—”
“Gee, thanks,” I snapped. “Are you serious? You want me to be a stoner too?”
“Darling, I want you to be less anxious, that’s all. I want you to be whoever you want to be,” Mom answered cryptically. “Look, weed is superior to all those anti-depressants shrinks prescribe to kids these days. It won’t poison your liver like Prozac. It’s organic.”
“Arsenic’s organic too,” I argued. Plus, some kids at my school would bounce off the walls without their so-called evil-shrink pills. But maybe I was too stiff.
Soon after, I opened the box, took one and lit up. After only two inhales, I felt trapped inside a thick glass room. Then, when I ventured down to the street for a soda, people seemed in a galaxy eons away. It scared me. I vowed not to try it again. How could my mother stand to feel so cut off? Or was it different for her?

As a token of my appreciation for the indie book community, nab a FREE download of Beyond Secret Worlds, a fun, fantasy-filled short story collection that includes my brand new story Blue House Magic! Blue House Magic is the lead-in to the forthcoming book three of my Fireseed series! Find out what Ruby and Blane are up to in Vegas-by-the-Sea.
Get it FREE at: Amazon, iTunes, Kobo
*******
Stop by these fabulous bloggers, spreading word about Heart in a Box and other great book deals (more added as I get them): MS Kaye, Alyse Miller, River Fairchild, Elodie's blog, Heather Gardner, Lucy Leroux, Christine Rains, Raine Thomas, SF Benson, Bridie Hall, Tricia Zoeller, Rachel McClellan,

a Rafflecopter giveaway
Posted by Catherine Stine at 9:13 AM 25 comments: