A Tiny Story about a Huge Mama Squid

Welcome!
I wrote a 200 word piece about a mama squid for Rachael Harrie's 2nd Platform-Building Challenge. Here are her rules: 200 words or less. You must use the word imago in the title, and these words in the body of the story: lacuna, miasma, synchronicity, and oscitate. Well, of course I had to look up lacuna and oscitate! But I knew the rest. Anyway, enjoy.
The Baby Squids' Imago Settles In
Mama pressed her 1,300 unborn ones close as she swam toward the schooner. It had sunk in deep waters where predators were few. She propelled through its porthole by oscitating her mantle outwards then inwards. Running a stream of saltwater through the delicate infant sac, she settled it into a wooden chest filled with shiny gems. A miasma of bubbles shimmied up and out through the porthole.
Mama was hungry, but before she ate, she needed to make sure her embryos were safe. Peering around with eyes that sucked in the dim light, she searched for famished sharks and tuna. None. Safe. Next, she searched for food.
Along the rotted wall, algae grew. She propelled up gently, as to not disturb her spawn, and jetted over. The lacuna of the pliable greenery hid pearly fish. With four of her limbs, she stuffed as many as she could hold in her beaklike mouth.
Satisfied, she undulated back and spread onto her precious cargo. Soon, she felt tiny nudges and twitches. Raising slightly, she saw hatchlings, transparent and quivering. She was so lucky to have found this sanctuary in time. Ah! The sweet synchronicity of life.
Posted by Catherine Stine at 3:21 PM 34 comments: 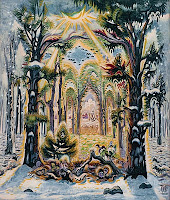 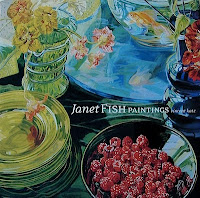 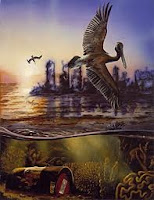 I'm posting random treats!
First, thanks to Sam de la Pena and Mel Corbett for gifting me with two Versatile Blog Awards. Sam describes himself as an author/nursing student/bleeding heart heretic. I've really been enjoying his posts. Visit his witty blog here. Mel writes speculative fiction. Take a look at her blog here. As for the Versatile confessions that I'm supposed to reveal when granted this award, I'll give you a few. Um... I love Brussels Sprouts sauteed with peanut butter; I love the shows Louis CK and Celebrity Rehab (I know, I should be ashamed of the latter, but Dr. Drew is addictive). And, some of my favorite artists are Janet Fish, Charles Burchfield and Alexis Rockman, two of whom have seen my paintings, which is amazing in itself. One of my prized possessions is a Burchfield drawing of thistle my hubby gave me. Above, from left to right, is Burchfield's Four Seasons, and a Janet Fish painting. On the bottom, is an Alexis Rockman, who speaks to bio-tech and climate change.
Next, here's a link to author, Lev Grossman's New York Times article "From Scroll to Screen" on revolutions in reading that include the ancient use of scrolls, the invention of the Guttenberg Press that spawned an explosion in "codex" literacy, and the rise of eBooks that democratize the publishing playing field. Read it here. Lev has written The Magician and The Magician King.
Posted by Catherine Stine at 5:54 PM 11 comments:

I've invited over Helen Mallon, author extraordinaire.
She writes mostly for adults, but has a few short stories aimed for the teen/crossover market. She says her proudest moment came when she received her first royalty check for her e-story entitled "Did You Put The Cat to Bed?" Currently, she's working on a novel entitled Quaker Playboy Leaves Legacy of Confusion. She also loves her work as an editorial consultant for writers of all stripes. Learn more at helenmallon.com.
Today, I've asked her to speak to the differences and similarities between the adult and YA markets.
Helen: Obviously, publishers market to different audiences, YA or adult, but the writing itself also addresses different points of view. Not only the point of views of characters, but of readers. For example, in my adult short story with a teen protagonist. You Say You Want a Revolution, coming out soon with bookstogonow.com. It's a dark tale about a girl who's gotten involved with a teacher, and told from alternating points of view: the teacher and Sarah's. If a teen asked me about reading it, I'd say "Check with your parents first."
Mark hadn't planned to get involved with a student when Sarah came to him for math tutoring. But her long brown hair as she sat beside him in the tiny study room had reflected tints of roam, even peach. Then unexpectedly, the florescent light overhead stopped buzzing and she had looked up at him, startled... so Mark convinced himself that... it was she who had seduced him.
Yes, YA can and should deal with tough subjects and nothing should be taboo. However, if this story were written for a YA audience, I would have emphasized Sarah's voice because ethically speaking, the two voices are not equally "valid." Adult readers are generally better equipped to untangle moral ambiguity, and authors have a responsibility to respect the developmental level of their readers, without "talking down" to them.
At the story's end, Sarah discovers her own power when she and the teacher encounter another teenager being mocked. "Keep going!" Sarah's hands were fists. She was buoyant and upright, and she wanted to run like hell as soon as she knew that Greg was safe. She had never before saved anyone.
Including the point of view of a child molester is not the only thing that makes this an adult story. The Beatles inspired title makes an ironic reference to the sexual revolution, which hints at Sarah's victimization and emerging power from a decidedly adult, poignant distance.
In contrast, my story I Want to be Just Regular is intended as a crossover piece--for both teens and adults. Olivia's dad has moved into the bathroom and won't come out. Will Dad emerge to attend her high school graduation or will he let her down? Here, Olivia describes an English elective she took, hoping to understand him better.
"Shakespeare and Madness" wasn't explaining my father better to me. Shakespeare's crazies were either faking it or they pretty much brought it on themselves. I thought Ophelia was kind of a twit. My father wasn't filled with hubris or sick with love. He owned a big moving company whose motto was 'We Bring Them Home.' And before that, he liked to fart around in his vegetable garden.
What makes this YA appropriate is the lightness around Olivia and her nutty father. Olivia sets the tone... I believe that the same first person character would speak differently in a book intended for adults... as a child speaking to an adult audience is regarded from a terrain of years and experience. What we might consider narcissism in teens is actually a path to discovery in which common events such as falling in love, breaking up and making career decisions are fresh experiences that never have happened to them before!
Consider an adult book with universal appeal, To Kill a Mockingbird, Scout's first person narration is often from a child's innocent point of view, yet it's also moderated as she looks back from a position of adult experience.
What about you? What differences do you see between writing for teens and adults?
Posted by Catherine Stine at 6:03 AM 19 comments:

Labels: adult fiction, differences in writing for teens and adults, indie bands in YA

On this last day of lazy summer bliss, I want to post something light and fun that meanders away from the heady world of books and writing. A couple of weeks ago on facebook, Jonathon Maberry posted an incredibly cute photo of a baby Dachshund posing as a hotdog. It's on my
desktop and it cracks me up every time I see it.
I love animals, and weird photos, and unlikely friendships. Who doesn't? So, I poked around online and discovered more great examples. hope you enjoy them as much as I do.

There's Roscoe the hound with his best friend, Surya, the orangutan. These photos come

from the Institute of Greatly Endangered and Rare Species, which is doing valuable work! Here's a link to their fund. You can see that Surya and Roscoe are actually doing a book-signing. Okay, I guess I couldn't get through a post
that had zip to do with writing and books. Check out the other strange bedfellows. Now, for an animal story or two...

One summer during high school, I went to the shore with a friend. Every morning as we got dressed, we'd hear whistles as if construction workers were catcalling us. We couldn't figure out where it was coming from. Finally, on the last day of vacation, we scoured the windows of the neighboring building, and discovered that the culprit was a giant green parrot!

One more. When I was five, I had a chipmunk "friend" who would hop up on a boulder in front of our vacation house deck, and chirp. I began to leave him saucers of peanut butter. He would fill his cheeks with it as he tipped his head at us. One evening, as I ventured into the bathroom for a bath, I found my chipmunk in the toilet, desperately funneling at the water to stay afloat. I yelled for my dad, who rescued the chipmunk with a butterfly net.

What's your funniest memory of an animal encounter? Of your own pet? Any pet talents? Idiosyncrasies?