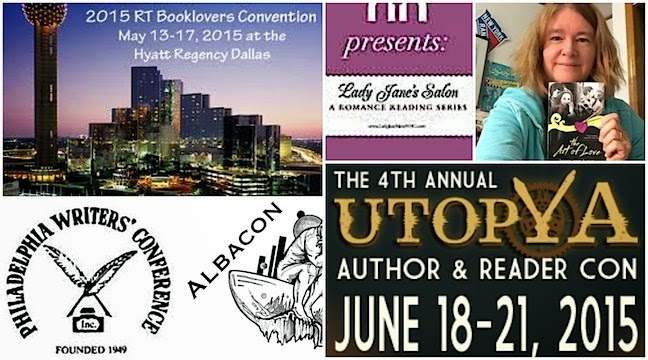 I decided this spring to participate in book cons, be on panels and do readings. I'll see which I like best and I'll report back to you. Promise! For two of them I have pre-order book forms, so for anyone attending UtopYA (Nashville in June) or RT Booklovers con (Dallas in May) who wants to order any of my books, they can be reserved, with perks! Explained below:

If you pre-order you get a cool goodie bag. With orders of two or more books you get price breaks and a cool goodie bag! Not just bookmarks... I have a special treat no one else will have. My events are listed in chronological order. The pre-order form links are with their matching events. If you're in NYC, Philly, Albany, Dallas or Nashville, I would love to see you! Here goes:

NYC, Monday, May 4, 7 to 9 pm, Lady Jane's Salon
I'll be reading at Lady Jane's Salon from my Art of Love Boxed set romance, along with some other great readers, including Zoraida Cordova. Admission is $5, or a gently used to book to raffle.  Cash bar. The Salon is located on the 2nd floor of Madame X’s Bar, 94 West Houston between LaGuardia Place and Thompson St. Stop on by!

Albany, May 8 - 10, Albacon
Albacon, a sci-fi & fantasy lovers convention where I'm on panels: YA spec fic, dystopian lit, SF vs fantasy, novel craft & more. Plus I'll be signing books. For hotel and other details click here.

Dallas, May 13 thru 17, RT Booklovers Convention
I do not have a book table here, BUT I WILL be making appearances at Club RT and I DO have a book pre-order form (link below). My Club RT times are as follows:
Thursday, May 14 from 11:30 to noon

Philadelphia, June 12 - 14, Philadelphia Writers' Conference
I am teaching a class in writing YA fiction (3 days, one hour a day), plus select from many other lectures and events, according to your personal interests. For more info click here.

Nashville, June 18 - 21, UtopYA
I will have a book table for two days at this event! (Millennium Maxwell House Hotel). The premiere con for lovers of YA, NA, fantasy and paranormal. Plus, who can resist the wonders of Nashville, including the Grand Ole Opry?
My UtopYA book preorder form is here.

Are you planning to go to any book fairs or conferences this summer? Which have you gone to that you think are worthwhile?

Wow, there are so many great books launching this spring! Here are some I can totally vouch for:

DRAWN by Christopher Ledbetter
YA dark fantasy
Caught between the sweltering fall landscape of Wilmington, NC beaches and southern illusions and expectations, all 16 year-old Cameron Shade thinks about is art. That, and for Farrah to view him as more than just a friend. Cameron hopes he can win her heart through art.  After several warm interactions with Farrah, including painting together at the beach, Cameron discovers just how complex Farrah’s life is.  To impress her, Cameron sketches her portrait into a mysterious notebook. He nearly jumps from his skin when the drawing moves and communicates with him. Farrah's now in grave danger because the sketch he drew of her sucked her real-life’s soul into the sketchbook. Cameron now has 28 days to extract Farrah. To save her, he must draw himself into the book. If he fails… they both die.
Pre-Order DRAWN at Amazon

The future is set for Lt. Commander Aden Pendar, son of a Hyrathian Duke. Poised to secure his own command and marriage to the queen’s daughter, he’ll stop at nothing to achieve his goals. But when the Alliance denies Hyrath’s claim on the planet of Kavil and declares war on their world, Aden finds his plans in disarray. Entrenched in battle and told he won’t make captain, Aden’s world begins to collapse. How will he salvage his career and future during Hyrath’s darkest hour? One chance remains–the Dragon. Lost many years prior, the legendary ship’s unique weapon is Hyrath’s only hope. Can Aden find the Dragon, save his people, and prove he’s capable of commanding his own ship?

Get Dragon of the Stars at Amazon, B&N, Smashie

Amazed & Elated: Depressed and Deflated by Aron Lee Bowe
a graphic novel about the joys & horrors of growing up
***highly recommended by yours truly*** see my review on Amazon
Aron Lee Bowe’s mother says, “If Aron is such a good artist, why in the hell does she paint the crap that she does?” Not daunted, Bowe turns her wonderfully wretched life into a gut-tickling romp. Bowe won the Charles Schultz award for digital cartoons and the first place Humor prize from the National League of American Pen Women. She is artistically committed to telling stories of great significance through the eyes of a goofball. To goof off too, visit her website.


Get the Amazed & Elated paperback

Rice Cooker Revenge - About a vengeful rice cooker (!) by S.J. Pajonas
speculative fiction, short story
It sits there on the counter, quiet and contemplative. Who knew rice cookers could be so vengeful? Ryu must decide whether to stay or leave The Chef’s kitchen, so he turns to an unlikely ally for help.
Shhh… Listen To The Gods.
The Japanese believe the gods live in all things. Trees, appliances, animals, buildings — they all have a spirit living within them. Maybe, if you listen carefully, you can hear them too.

Get Rice Cooker Revenge at Amazon ebook
To check out all of S.J. Pajonas' books click here.

Full Moon by Kristy Centano
A Secrets of the Moon book—dark fantasy
Hidden lies…hidden demons…hidden battles…All leading to the ultimate sacrifice… She knows what really brought me here. She knows the motives that lead to our friendship. She doubts what’s in my heart. What she doesn’t know…all I’m willing to sacrifice in order to ensure eternity for her.
Get Full Moon at Amazon ebook, B&N
See Kristy Centano's novels here.


A desperate woman hides in a fortified farmhouse. Outside, her former neighbors and friends prowl the night. Dead. And hungry. Her only ally in the coming battle — Biggun. If there’s blasting to be done, Biggun is ready for it.

Get it at Smashie

What new reads have you discovered this spring?
Posted by Catherine Stine at 9:28 PM 18 comments: 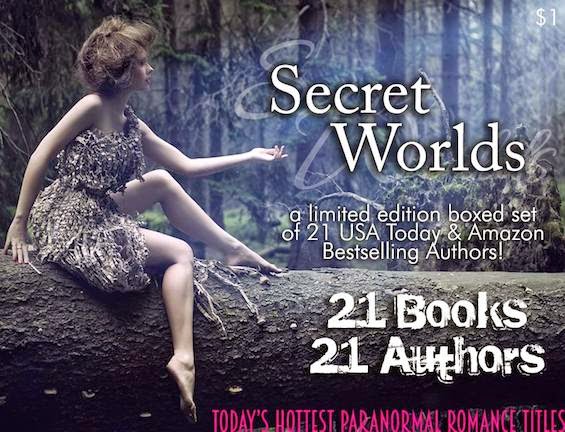 SECRET WORLDS
is a best-selling box set of spicy paranormal reads brought to you by USA Today and Amazon Bestselling authors! With twenty-one stories and over a million enchanting words of fiction, this box set will keep you spellbound! Dive through Secret Worlds and into the arms of heroes who will steal your heart and leave you hot. 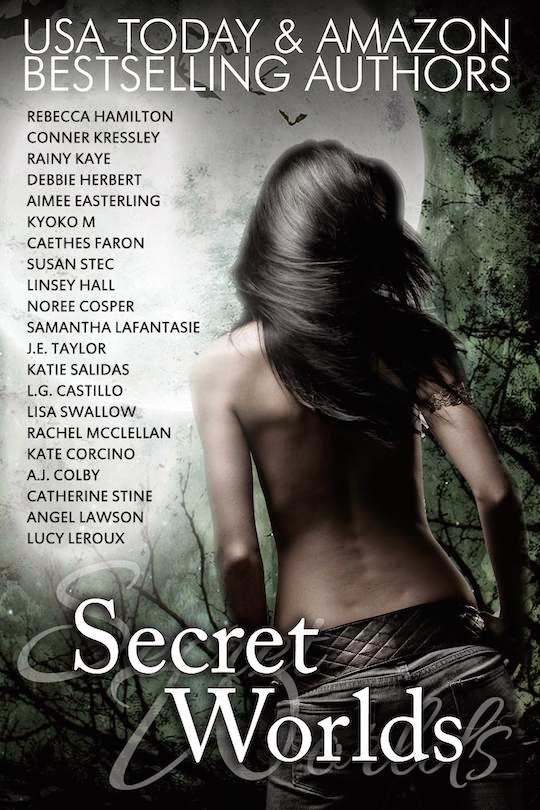 Whether you love paranormal romance that warms you up or sets you on fire, this box set will have something to entice your preternatural sensibilities. Supernaturally thrilling and engaging, this set has it all: ghosts, vamps, mind-readers, shape-shifters, demons, faeries, beautiful hybrid creatures and more.

For a limited time you can enjoy all of these stories, including ones slated for the big screen!!! When purchased separately, these books would cost over $50! But they are yours for less than $1. Get yours before this limited time deal ends! 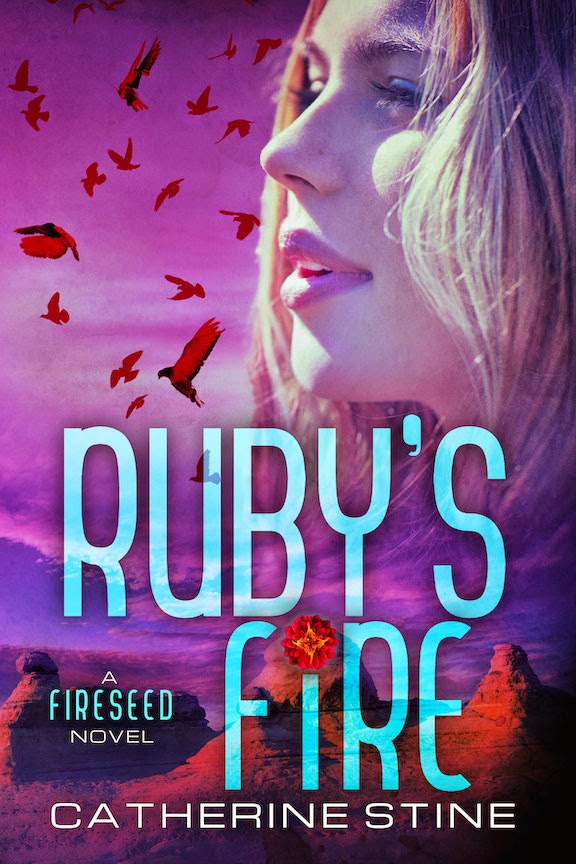 Summary of Ruby's Fire, my award-winning novel in Secret Worlds:


“Eighteen year-old Ruby and her little brother Thorn, have only known a life blighted by the extremist Fireseed Cult. The night Ruby is set to be claimed by one of its cruelest and oldest leaders, she makes a bid for freedom. With Thorn in tow, she stumbles into the world beyond, and finds an opportunity for a fresh start in Skull’s Wrath under the guidance of Nevada Pilgrim, a woman who may not be all she seems. Ruby's new life could bring her friendship, love, even fortune, but nothing comes without a price. Is Ruby's talent for elixirs keeping the roof over their heads, or do some of her associates have a more sinister and lucrative interest in them? Life outside a strange cult isn't without its dangers, and the experience leaves Ruby transformed and communing with the Fireseed more closely than she ever would have imagined. Stine delivers a thrilling adventure led by an exciting cast of characters, and the romance is really well handled.” - YA’s The Word
***Ruby’s Fire was a finalist in the Next Generation Indie Awards***

Praise for Ruby's Fire:
“Romance, betrayal, secrets, great world-building!” - Seeing Night Reviews
“Full of creativity, imagination & original concepts” - Fluttereal Flight
“Ruby kicked butt as the resident healer, plus good love triangle!” - Amazon reader
“You know when you get a book and it's much better than you thought it was going to be? Ruby's Fire was definitely one of those books! I absolutely loved it. What an amazing plot! Also, there's a fantastic twist I didn't see coming.” - (Mis) Adventures of a Twenty-Something Year-Old Girl
“I can't even begin to tell you how smoothly the writing flows. It's perfect. No joke. I went into this book not knowing what to expect and what I got was an amazing storyline.” - Words Create Scenes

Giveaway announcement!
We have 70+ prizes up for grabs at our Secret Worlds Facebook party, including multiple gift cards ranging from $5 to $100, plus a Kindle Fire!!! And the prizes just keep coming. Be sure to join the party for your chance to win these prizes and more coming down the pipeline! The party is on June 29 but the giveaways have already begun.
70+ Prizes!

Pre-order our Limited Edition Box set for only 99 cents!
Kindle, Nook, Kobo, iBooks
Posted by Catherine Stine at 6:52 AM 24 comments: