I did it! 50K+ word count. I’m a Nano winner! I didn’t give up. I only had a couple of really low word count days (and a lot of angst), but now I have a good part of a working draft. Halleluiah! As the amazing fantasy writer, Holly Black reminded folks who were slowing down and doubting themselves during that difficult 3rd week: “Right now you are not writing a good book, you are writing a good draft.” Or as Chris Baty, who started Nano in 1999 reminded folks who were experiencing a sluggish mid-point in their draft: “Incite change… juice it up by inflicting some major changes on your characters. Crash the spaceship. End the marriage. Buy the monkey!” Or, a last piece of advice from super-sage, Tamora Pierce: "Set characters in motion, even if it's just to higher ground. You learn something, you can tell us something, by how people deal with with something that requires them to assemble themselves and move from their comfort zone."

These words of wisdom from nano peptalkers helped free me up to continue barreling ahead without obsessively editing, or poring over material from the day before. My Nano writing buddies helped spur me on too. Thanks, all! One of the few things that suffered, was my blog posting. But now that December is here, I will post more frequently. Promise.

What I learned from Nano:

I can actually write before noon!
Disaster won’t ensue if I let the laundry pile sky high
My family will be fine without daily home-cooked meals
If I write every day, I keep the story thread quite fresh
I do not need to obsessively edit each chapter as I go.
I can do a live write-as long as it’s not in Starbucks, with music blasting
There’s a huge adrenaline rush in banging out a draft so fast

And the best part? My “you-did-it" gift is a trip to China!

What’s your Nano experience? The most important thing you learned? The funniest thing you discovered? The hardest struggle? Your most proud moment? Your post-Nano gift to yourself?
Posted by Catherine Stine at 7:56 PM 13 comments:

What do you feed yourself when you’re trying to keep up your strength for Nano (National Novel Writing Month), basically writing each day until you keel over your laptop, in an exhausted haze?
I’m eating fish. Brain food. I had langostinos last night for dinner. What the heck are they, you ask? A crustacean sometimes called the Squat Lobster that lives in the waters of Chile and Spain. My hubby made langostino pasta. Mmmm. Today, I had sardines for lunch, in my salad, and tonight I’ll dine on Salmon teriyaki takeout. My brain will be fully charged from all of that omega-rich fish, but I fear possible mercury overdose a la Jeremy Piven. Perhaps I should switch to spinach and collards. A plain old mineral-rush.

Many writers are probably binging on junk food: fries, ice cream, Twinkies. You heard about that guy on the news who lived on Twinkies for a couple of weeks and still lost weight. It’s all about the calories, he determined. Don’t use that as a rationalization for self-medicating your wobbly confidence this Nano season or your stomach will rebel, and you’ll lose a few precious word-count days.

On another note, Erin F, the NYC Nano moderator posted about her inner editor. She named hers, Ethel, I want to say? I think I’ll name mine too. David. (My inner-editor is a “him”—a father figure from childhood, who paid close attention to details?? My muse is male too, so figure that one out, Dr. Freud!). Problem is, I’ll have to give my inner-editor more than one name. You see, David, has a few sides to him. When I’m sailing along he’s mellow too, so I’d call him Dave. But when I’m stumbling and the writing’s messy, my inner editor rails on me to go back and edit the darn mess. I reason with him, remind him that I’m not ALLOWED to go back and edit during Nano. He snaps, “But you’re writing’s sloppy, full of gaping holes and spelling errors.” That guy I wouldn't call David or Dave. I’d call him Mr. Thang.

Finally, the fabulous Aimee Bender, author of Willful Creatures, and Nano’s pep-talker of the day, encouraged writers to deviate from their outlines. She told us to follow our Nano daydreams, the playful questions percolating in our heads. In her words: “If you are writing a grocery scene, let’s say, and, if, on aisle 4 of the grocery store, character 1 starts to open up a peanut butter jar and eat it, and character 2 is so irritated she goes to flirt with a guy on aisle 3, and if this scene was supposed to be their first kiss—well? Maybe it's just not their first kiss at all. Maybe the guy on aisle 3 will end up being incredibly important!” Follow the scene to an unexpected place in the way you normally would NOT, in a tight outlined piece. I’ve learned to outline. I have to, to avoid wasting huge amounts of time as I spin a story into the outer rings of Saturn. BUT, now may be a great time for me to deviate—to noodle—to play—to take a dialog to an unintentional place. I’ll allow myself that liberty, in between scenes.

What about you? Special Nano foods? Your inner editor’s name? Your bravest deviation from the norm? Spill it here!
Posted by Catherine Stine at 5:59 PM 15 comments: 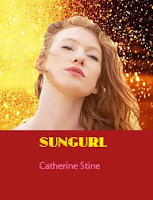 I decided to try Nanowrimo for the first time. It’s an amazing online writers’ event, where you bang out a draft of a novel in 30 days. You have to reach 50,000 words to win. And there are multiple winners! What do you win, you ask? Um, not $$ or a trip to Paris. You win a certificate with a coat of arms inscribed with a coffee cup, a laptop, and stack of manuscript papers… and, well you get the drift. You gather together some writing buddies, and you can see their daily word counts, which can either send you into a panic, or inspire you, or drive you on—or a heady mix of all of it. No editing allowed!

That’s the hard part, and the greatest lesson. I always edit every chapter, or scene. Not to do so, feels like I'm an incorrigible nail-biter in mittens, or as if I'm resisting a big bowl of chocolate ice-cream sitting right in front me.

But there are perks. You get to create a fake book cover, like my clunky attempt at Photoshopped layers (above-working title). And there are write-ins every day in NYC, and probably lots of other places. I mean, this thing is global, folks! Nano is even in Africa, which is why the site is operating at the speed of tar advancing on a level pavement. But they promised to have the kinks ironed out asap. Besides, it prevents you from checking on your writing buds’ word counts too often.

So far, so good for me. I’m sure by day 20 I’ll have a backache. But hopefully, by day 28, if I keep up the word count, I won’t care about the backache, or the wonky eyes, or the fact that my house is getting messier and messier as I ignore everything around me.

Are you Nano-ing? Newbie like me, or old pro? What’s your experience with it this year?
Posted by Catherine Stine at 2:52 PM 12 comments: