December is always a magical time in New York City! Check out some of the holiday flavors in this all-pix post.


What's your favorite wintery scene in your hometown?
Posted by Catherine Stine at 7:05 AM 18 comments:

Indie Life, Reaching your Readers! Plus the Launch of Fairchild's Diamonds & Dust

Today is Indie Life, a feature devised by the lovely Indelible authors. It takes place the second Wednesday of each month, where they invite fellow authors to chat about the indie writing life.

In prepping for the February launch of my new adult romance novella, Model Position, I've been thinking about effective ways to get the word out to readers. Methods of the day change so fast it's dizzying. Reminds me of how Apple and other digital companies are always launching upgrades. But one must keep up; it's an industry essential, indie or not. I think a blog tour is still advisable, or at least a cover reveal and book blitz. Reviews matter, and it's smart to get arcs out to people who are eager to read and review. I've done Netgalley with good results. Another reader site is Wattpad.  I have yet to do a Facebook event, which I will do for Model Position. I have yet to put together a street team--intimidating without a zillion hours a day to devote to it. I'm thinking of hiring an intern... maybe in the new year? Those who have done street teams, how has it gone? I know two authors who hired publicists. I'd have to barter the cost because it's expensive! Though one colleague got TV interviews and the other landed an interview in the Atlantic. Not too shabby! I'll be exploring Yahoo chats and similar venues for my new novella, trying to reach the readers of my genre. What have you all found most effective to get the word out?

Another creative indie move is to join up with a group of like-minded authors to cross promote. That's how the Indelibles formed. I joined Untethered Realms, an author group who writes speculative fiction. On that note, I'd like to mention the launch of Untethered Realmer, River Fairchild's new novel, Diamonds and Dust!

Magic is real. So is betrayal.
Two heirs. A Kingdom of dust on a troubled world. One might resurrect it. One might destroy it all. Archaeologist David Alexander investigates the cave where his father disappeared and hurtles into another world, one filled with magic and bizarre creatures. The mad ravings in his father's journals of icemen and dragons may not be fantasies after all.
Convinced his father may still be alive, David begins a treacherous journey to find him and discover a way home. Along the way, he encounters a few unlikely friends. A Dreean warrior, a beautiful thief and a satyr join him as he searches. David's arrival into this new world sets off an explosive chain reaction of events. Faced with powerful adversaries and few clues, he may not get the chance to rescue his father before disaster strikes, condemning both of them to death. Or worse.

River Fairchild brandishes a dry sense of humor, and is owned by several cats. Lives in a fantasy world. A fabricator of magic. Makes stuff up and spins tales about it. Believes in Faerie crossings and never stays in one place for very long. Speculative Fiction wordsmith. The secret to her stories? Spread lies, blend in truths, add a pinch of snark and a dash of tears. Escape into her world. She left the porch light on so you can find your way down the rabbit hole.
Blog / Facebook / Twitter / Amazon /
Posted by Catherine Stine at 7:23 AM 24 comments: 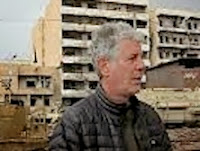 I’ve been obsessed by Anthony Bourdain’s Parts Unknown, a travel show to very offbeat places, but also a foodie show (which I’m not, or didn’t think I was until this). At first I found him to be wayyy full of himself, but I got totally hooked into the show watching the Tokyo’s dark nightlife episode, and the Detroit one where industrious folks set up makeshift eateries in their yards and living rooms. I’ve walked the streets of Detroit. It’s a train wreck, but a fascinating one. Here is Bourdain in Libya, uh, yeah. His wicked humor and clever scripts have invaded my brain. So, as a convert, I’m on a marathon episode watch.

I’m preoccupied with reading romance, since I’ve been writing new adult romance. Easy by Tammara Webber rises far above the pack. M Leighton’s Down to You with sexy twins Cash and Nash is sizzling yet silly in a super-fun way, and Aubrie Dionne’s space opera romance Colonization is quite creative (with beautiful yet creeptastic killer plants). I'm getting used to my pen name, Kitsy Clare in prepping for the launch of my NA romance novella, Model Position in early 2014. And I'm passionate about bad boy artist, Casper Mason in my next romance WIP.

I’m absorbed by holiday shopping, trying to find the perfect gifts for people: Craig Venter’s book, Life at the Speed of Light for my science nerd friend, vinyls at Rough Trade in Williamsburg, Brooklyn for my musically inclined son, Met opera tickets for the hubby--should it be Borodin's Prince Igor, Puccini's Madame Butterfly or Dvorak's Rusalka? Wow, the choices! Oh, and I booked an upcoming anniversary trip to the Dominican Republic, it doesn’t get much
better than that! Looking forward to riding dune buggies and segways, and taking a horseback trek through the jungle. You?

What are you obsessed with this season? Any cool new finds for holiday gifts?
Posted by Catherine Stine at 6:55 AM 21 comments: