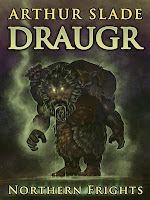 Gone are the days where publishing one’s own stories as eBooks was a questionable career move, akin to being published with a vanity press. With the advent of kindle, iPads and apps, and with less people buying traditional hardcovers (who has the cash to shell out $24 for a book?), bookstores and the publishing world have been in an uproar. Authors and readers are quite open now to new publishing delivery systems.

It seems almost every week, I hear word of another indie or ePublisher opening up for business. Dragonfly for fantasy and sci-fi comes to mind, as does Muse it Up in Canada. I hear more and more authors' incredible success stories about self-ePubbing with createspace, often selling so many copies that a traditional publisher comes calling after the fact.

A couple of weeks ago, on an online chat, a well-regarded children’s writer, Arthur Slade, revealed that he had formed his own publishing company to reissue his out-of-print books, such as Draugr, depicted above. He even named it after his grandmom! Mind you, this author sells via the traditional system quite well.

His admission prompted a blizzard of comments from other successful writers who loved the idea of publishing their own out of print books, or self-publishing manuscripts that their editors had turned down. And this produced a flurry of questions about the actual process: did anyone know of a great book cover artist, who worked freelance? What was the best program to format one’s manuscript for uploading to smashwords or create space? And what were the best sites to publicize eBooks? The kindle boards were highly recommended as a place that really helped get this part of the job done, while joining a vibrant online community.

This is truly an exciting time! Authors can pick and choose. They can have some of their books published with traditional publishers, and others, including more experimental work, or their out of print titles, can sell as eBooks. The author can take control over his or her book cover formatting, interior illustrations, even pricing. As Arthur Slade puts it: “One basic reason is that Amazon pays 70% of the cover price and that I can also publish my books in other countries without much effort. I'm a bit of a techie, so the process of turning books into eBooks wasn't too painful. I can get a book ready for Amazon in about two hours now. You can go through smashwords. That means you only have to do the book once and they send it to Amazon, B&N and iBooks. They take a small percentage. And, most importantly to me, I maintain control of my book over the long term!”

There are others joining in the conversation. Take a look at Joe Konrath’s blog post Ebooks Ain’t a Bubble and eisforbook, where a bunch of authors are posting about getting their books ready as eBooks, or Rob Sider’s site, 52 novels, where he helps convert your Word files to a kindle-friendly eBook text!

The stigma is gone, and the fearless tread on open, untrammeled ground. Please let us know about any really cool ePublishers, book cover artists, and blogs that cover this. Also, fill us in on any tips for DIY newbies. Check out Arthur Slade’s great blog on this topic while you’re at it! http://arthurslade.blogspot.com/ and his website, where you can buy one of his newly released eBooks Draugr and Dust: http://arthurslade.com/frontpage/

Posted by Catherine Stine at 8:11 PM