The Benefits and Perils of Using a Penname 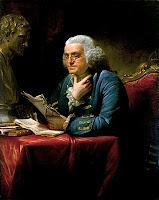 Ever thought about using a penname? Say you’re writing early chapter books and you also wrote a racy adult potboiler. You don’t want those third grade nippers googling you and reading about your loose ladies who work the graveyard shift at a sleazy nightclub. Say your cursed with the last name Meany (Real name!) or Pugh. Or suppose your name already has an infamous double, say Michael Jackson or R. Nixon.

Maybe you just love the mystique—the idea that you could be known as Alexandra Sahara for your erotica and also as Xander Smart for your boys' middle-grade fantasy series. Consider Benjamin Franklin. He was so into pseudonyms that he made up entire personas to go along with them. Many were comical, such as Silence Dogood, Harry Meanwell, Alice Addertongue and Timothy Turnstone.

He also used a pseudonym for more serious business. While in England, Franklin penned letters under the name of Benevolus. These letters to various newspapers attempted to answer the nefarious assertions made by the British press about the American colonists.

The popular author of the Animorphs series for kids, K. A. Applegate writes many books under pen names. For her Harlequin romances, she used the name Katherine Kendall. For her Disney Aladdin series she’s known as A. R. Plumb. Sometimes publishers themselves use pen names in their work for hire projects. For instance, Carolyn Keene, so-called author of the original Nancy Drew series, didn't even exist!

If you’re worrying about whether you need to use your penname to sign your contract, stop fretting. You would sign it using your real name, and then state that you are (real name) writing as (penname). Your public appearances could be a little sticky though. In that case, best to stick to phone interviews and blog tours or wear dark glasses and a wig in your Skype author chats.

But let’s get real. There are drawbacks to publishing under a penname. If your fans are looking eagerly for your next novel, or other back titles they won’t see your whole output, because you’ll need separate websites to support all of your personalities. You can’t really show off your true range because everything is so compartmentalized. And in ten years you may outgrow your penname, but you’re stuck with it. Your readers have come to know you only by that name. Think of it as being stuck with a raunchy tattoo that you’d love to raze off your flesh, but it’s in a sensitive area. Ouch.
Still not convinced? Perhaps you should read Kristen Lamb’s great blog post about why pen names suck.

Have you ever considered using a penname? If so, why? Have you already used one? More than one? If so, tell us about your experience with that! What would your fantasy pseudonym be, and for what genre of fiction?

Posted by Catherine Stine at 7:28 AM