My Inappropriate Teen Crushes for Heartthrob Hop Plus Tour Stops 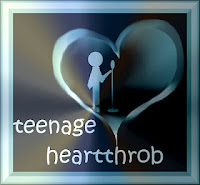 Today, March 7th, I'm guest posting on Lessons I Learned on the Path to Publication, over at Adventures in YA and Children's Publishing. Come read my checklist of hard-earned lessons and how I applied them. Right here!

On another note, Sarah over at Falen Formulates Fiction and her cohorts Emily White and Vic Caswell came up with the hilarious Teenage Heartthrob Bloghop where you describe seven of your teen crushes, however inappropriate. Most of mine fit into this category! And I'm not doing TV stars because our TV was broken for five years until my brother kicked it and it started working again. It's real people, folks. Names withheld to protect the guilty.


1. My dreamy English teacher who looked like Faulkner. He had sly green eyes, shiny black hair like Adam Lambert and big lips like Billy Idol. He taught The Moviegoer and other modernist tomes, and I attended a writers’ group in his living room, where I wrote sappy poetry. He broke off his marriage to have an affair with the gym teacher.

2. The dorky sales guy at the pharmacy up the street, 10 years my senior, but who asked me out on a date anyway. When he came to the door my mother let him have it! “Do you know how old my daughter is?” she bellowed. He shrugged and surely rued the day he ever spoke to me. “She’s twelve!” she answered and closed the door in his face. Good Mama bear.

3. The preacher’s playboy son, who was totally remote and sardonic. I’d see him talking with one of my English teachers and sigh longingly. His sister used to pick me up in her dad’s Rolls Royce (What's a minister doing with a RR?!) and we’d go eat French Fries at the neighborhood dive. When she found out I had a crush on her brother, she was furious. Hey, it wasn’t as if I had any control over my feelings.

4. A fellow art major who painted a Vermeer-esque portrait of me. This intense and soulful guy pursued me. Then when I came running, he fled for his life! I took it personally at first, but it turned out he was gay.  Not only did he paint, he crafted silver jewelry, and did gossamer drawings of street people. We ruled the art room, and we’re still friendly after all of these years. He's the chair of the furniture design department, get it?

5 & 6. My best friend’s two older brothers (so this counts as two). From kindergarten on, I hung out 24/7 at their house. One of the brothers kept owls in his closet, lizards in his basement and a goat in the back yard. The other was a great dancer, and collector of R&B. He had an entire room floor to ceiling of vinyl. I had crushes on both guys when I was a teen. Later, I realized it was all confused with the feeling that they were really like beloved brothers.

7. The pretty-boy neurotic with wispy blond hair and black trooper boots. I met him through a friend. He was model thin, and wore long, fey scarves and aviator shades. He had a b*tchin’ sports car, and drove like a demon on Red Bull. I kept begging him to slow down whenever he drove. Sure enough, he showed up at my school one day, wigged out of his mind. He had driven so fast that he’d wrapped his car around a highway guardrail.  I took him to my house and made him hot chocolate, but that was the end of us.

I guest posted on plots and chapter hooks over at Seeing Creative on Monday, March 5th. Hopefully, I demystified these two very important aspects of crafting the novel. Click here to hop over for a quick read.
Posted by Catherine Stine at 7:31 AM