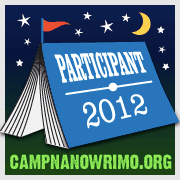 Two Novembers ago I participated in NaNoRiMo (National Novel Writing Month) for the first time. For the uninitiated it is a month-long writing event, where people from all over the world join together online to help cheer each other on to get a draft of their novel done, or almost done, in one month--to reach a total of at least 50 K words. The experience was enlightening. I didn't know I could write that fast, or write one scene after another, without going back to edit. You have no time to edit each chapter. Heck, I didn't even divide the writing into chapters. Just scenes, labeled "New Scene". It was crazy! But it worked, and it was exhilarating to watch my word count shoot up every day, and to cheer others on. There is magic in pounding out that shi*ty first draft, and magic in writing without obsessively reading your daily output.

I skipped last November, because I had just finished polishing a novel, and I badly needed a break. But now... I want to write a sequel and I need and want outside structure and a cheering committee.
Camp is on! There's Camp Nano June, and Camp Nano August, and I can't wait to meet my fellow cabin mates! Hey, we don't even need bug spray or sunblock! And we don't have to eat gloppy oatmeal or burned smores. Here is Galleycat's take on the event, including 60 tips. Click to read.

Here are inspiring Steinbeck quotes that Nano folks would heartily agree with:

1. Abandon the idea that you are ever going to finish. Lose track of the 400 (or so) pages and write just one page for each day, it helps. Then when it gets finished, you are always surprised.
2. Write freely and as rapidly as possible and throw the whole thing on paper (or on your laptop). Never correct or rewrite until the whole thing is down. Rewrite in process is usually found to be an excuse for not going on. It also interferes with flow and rhythm which can only come from a kind of unconscious association with the material.
3. Forget your generalized audience. In the first place, the nameless, faceless audience will scare you to death and in the second place, unlike the theater, it doesn’t exist. In writing, your audience is one single reader. I have found that sometimes it helps to pick out one person—a real person you know, or an imagined person and write to that one.
4. If a scene or a section gets the better of you and you still think you want it—bypass it and go on. When you have finished the whole you can come back to it and then you may find that the reason it gave trouble is because it didn’t belong there.

Are you doing Camp Nano? If so, come say hi (At CatherineStine). If not, what kind of discipline do you employ to get yourself writing regularly and profusely?
Posted by Catherine Stine at 9:34 PM