RIP, Mr. Bradbury, How You Still Light up the Stars for Us!

I am so very sad to hear that my favorite writer, mentor and inspiration died today. Ray Bradbury and his stories lit up my world so many years ago when I bought Martian Chronicles at a school book fair. Not just lit me up, but exploded my mind into a million synapses of burning delight.
Part poet, part magician, and ever the inventive plot-meister, Ray wrote some of the best science fiction around. He was also an illustrator, and did cover art and interior spots for some of his own books. Something Wicked This Way Comes was a deliciously dark book about a carnival coming to town that was more sinister than the usual. (Don't you always suspect that clowns are perverse little demons? Think Killer Klowns from H*ll). His short story, "Fire Balloons" proves that not all summers are the same-old, same-old, but can transport young adults to a place of dreams. In Ray's words: "It's a story in which a number of priests fly off to Mars looking for creatures of good will. It is my tribute to those summers when my grandfather was alive. One of the priests was like my grandpa, whom I put on Mars to see the lovely balloons again, but this time they were Martians, all fired and bright, adrift above a dead sea." To read his whole piece, click here. It's in the June issue of The New Yorker, all devoted to sci-fi! Pick this issue up, it's totally worth the $.

Ray's list of classics is way too long to list here. But mention the title Farenheit 451 and you know how influential he was, and still is. This book is a cautionary tale about how important it is to protect books, and intellectual thinking. It's read in high schools across the country.

My favorite, forever is The Martian Chronicles. I have a version in Russian and French and wherever I travel I pick one up. (MC in Turkish, here we come!) This is the one that first lit my head on fire. His prose poetry still reigns supreme in passages like this: "Mr. and Mrs. K had the fair, brownish skin of the true Martian, the yellow coin eyes, the soft, musical voices. Once they had liked painting pictures with chemical fire, swimming in the canals in the seasons when the wine trees filled them with green liquors, and talking into the dawn together by the blue, phosphorous portraits in the speaking room. They were not happy now." Why? They sensed the coming of the humans from Earth is why! 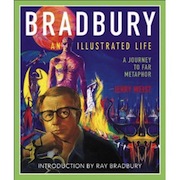 I could go on and on but I'll leave you with some great links:
For a book containing his illustrations, Bradbury, an Illustrated Life, by Jerry Weist.
For more on Ray's life and work, read today's article on io9, the coolest online SF mag. Click here.
New addition, Obama weighs in on Ray here. Who ever said Obama wasn't a smart guy?!

Mr. Bradbury, I just know you can hear us crying down here, and you're probably saying, "Don't sweat it, folks, I'm having the time of my life in the stratosphere, drinking up virtual Dandelion Wine." So, let's all toast to invention, to Ray Bradbury and his wonderful works.

Posted by Catherine Stine at 12:00 PM