Ai Weiwei, on artist & society, plus a clarification of a confusing Kindle topic

I saw the Ai Weiwei film by Alison Klayman last night called Never Sorry. Ai Weiwei, a powerhouse conceptual artist from Beijing was silenced and under a sort of gag order since authorities in Shanghai built him a studio, and then singlehandedly dismantled it with bulldozers! Go figure. In 2011, he went through 81 days in secret isolation for no reason that made sense. And before this, police broke into his hotel room in the middle of the night and beat his head so badly that he developed swelling of the brain, which required surgery. Why? Perhaps it had something to do with him designing the Beijing Olympics "Bird's Nest" stadium, and then protesting the Olympics, after he realized that many houses would be torn down and many people displaced in the process. It also could have been the government's embarrassment at Weiwei documenting the devastating earthquake in 2008, which killed thousands of school children in Sichuan province, that the government tried to cover up. 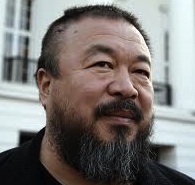 Up until this time, Weiwei documented all of his art on Twitter, and he is a real proponent of the Net as a truly democratic form of communication. His art is irreverent, such as painting the Coca Cola logo over vases of antiquity, or covering the Tate Modern gallery in millions and millions of sunflower seeds that were actually fake, hand-painted seeds.

Hearing him talk about art and life is truly inspiring and he refreshed my own vision of the creative life and all it entails. For someone to persist against so many odds, and prevail is sobering yet uplifting. Here is an interview Weiwei gave for the Guardian.
You can also follow his news on his Facebook page and on twitter at #AWWNeverSorry.

His beautiful Zodiac heads were on exhibition here in New York and Los Angeles last year. Steven Little, the curator of the LA exhibition had this to say about them: "Ai Weiwei’s Zodiac Heads are a multi-layered meditation on political power, the nature of time, and the often tormented relationship between China and the West, at the same time calling into question the arbitrary nature of such concepts as national treasure."

On a publishing note, author Donna Galanti posted this link to Moira Roger's helpful article about Kindle Lending Library vs Lending Kindle Books, a normally confusing topic that many would love clarification on!

What do you think the responsibility of an author or artist to his or her audience? To herself? To the world?
Posted by Catherine Stine at 11:44 AM