As a proud member of the speculative group Untethered Realms I'm thrilled to brag about UR authors' new works. 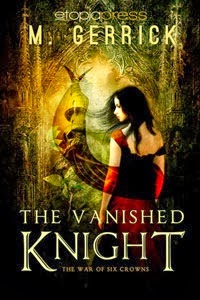 Misha Gerricke's novel, The Vanished Knight from Etopia Press is out! Isn't the cover gorgeous?!
The Black Knight, Nordaine’s crown prince, has no legitimate blood heirs, meaning someone must be appointed to succeed him. With two of the candidates’ families willing to kill for the appointment and the third candidate being seen as a threat to all, peace is balanced on a sword’s edge. But then the Black Knight vanishes.
Darrion and Gawain, two of his possible heirs, set out to find him, but after they rescue an earth-girl from Merithian soldiers, they discover she has possible ties to Nordaine. Not only that, but Callan Blair could be an Elvish princess. And war looms on the horizon…
Where to find it! Amazon & Amazon UK

The Ghosts of Aquinnah, Julie Flander's new novel will be released by Ink Smith Publishing on December 5! Today, I'm revealing her beautiful cover and a teaser blurb: 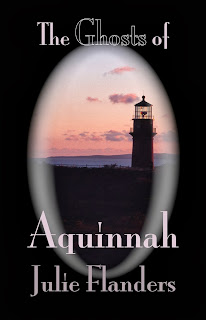 A brilliant flash of light transcends through time. Another freezes a cloaked figure within a frame of salty mist as waves crash against a rocky shore. Her harrowing expression shadows the beacon to a pinprick. By the next blaze, she is gone. Only the lighthouse remains.


Hannah’s eyes blink in step with each heartbeat. Images of her deceased parents and Martha’s Vineyard explode like firecrackers inside her mind. She shakes her head. For weeks this eerie woman dressed in nineteenth century garb has been haunting my webcam, but tonight she stared into my soul. Why? ...  Who is she? ...


Casting aside months of research on historic lighthouses, Hannah drives to the coast and boards a ferry. What is the strange connection she has to this mysterious woman suspended in time? Hannah finds out. But, it’s not what she expects. Hannah unravels a century old murder.

Julie Flanders is a novelist and freelance writer in Cincinnati, Ohio. She's had a long love affair with the ocean and has spent many summer vacations on the island of Martha’s Vineyard. When not writing, Julie can be found reading, cheering on her favorite sports teams, and watching too much television. She is an animal lover and shares her home with her dog and cat.

The Realms Faire, created by M Pax and sponsored by Untethered Realms is fast-approaching! There will be fun games, and mega-prizes, including a brand new KINDLE! Stay tuned... And stay tuned for my own exciting new news... coming soon!
Posted by Catherine Stine at 8:39 AM