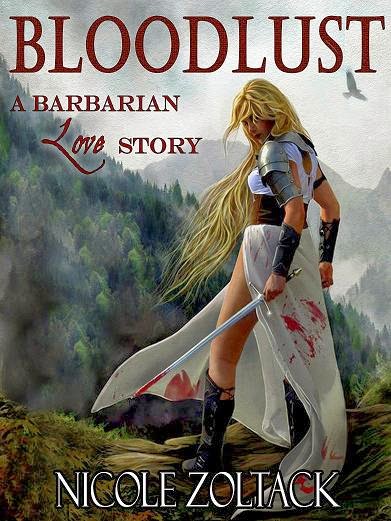 In a world torn by prejudice and hatred, six races struggled for supremacy. Desperation…

Barbarian-Princess Ivy is unwilling to allow her father to provoke the other races into war and forms an unlikely alliance with Lukor the goliath to save her people from utter destruction. Betrayal…

Unbeknownst to her, Lukor blames the barbarians for murdering his sister and plans on sabotaging her goal. Bloodlust…

Almost despite each other, they grow to respect each other on their journey to decode secret messages from the trolls. But nothing Ivy can do will prevent the war as her father is blinded by Bloodlust and incites it himself. Not even killing him and becoming Barbaroness can stop the tide. And when Bloodlust claims Ivy, forcing her to kill everyone in her path, she must make a choice to destroy even Lukor, who she may have started to fall for and him in return.

Finding Me by Angelica Brazil Stewart:

It’s not because she has a vision of her boyfriend murdered. And then he’s found dead exactly as she saw. It’s not because she suddenly has the ability to move objects when she’s upset. It’s kinda cool to close a door without touching it. It’s not her overbearing mother who only cares about appearances. Chloe’s grown accustomed to her families distance. So what has Chloe cringing in fear?

It’s a love that defies reason. It’s a love that speaks to the heart. It demands attention. But Chloe struggles with a love that exposes the soul. What will her family think? What will her friends think? And is she worthy of his love. It’s having to become another person for a new group of people. Chloe knows she’s not perfect but apparently she was when she was Amanda in another life. Her new friends won’t let her forget. It’s the stench of death that hoovers over her every move. It’s the threat of finality as she tries to acclimate to a life of super human proportions. It’s an enemy she can’t see, doesn’t remember, and can be anyone she’s ever known. But her enemy knows her well. She’s the lone person with the ability to destroy him. But she doesn’t remember.

And it’s never discovering who she really is before finality meets reality.

Buy on Amazon for Kindle

Posted by Catherine Stine at 6:41 AM