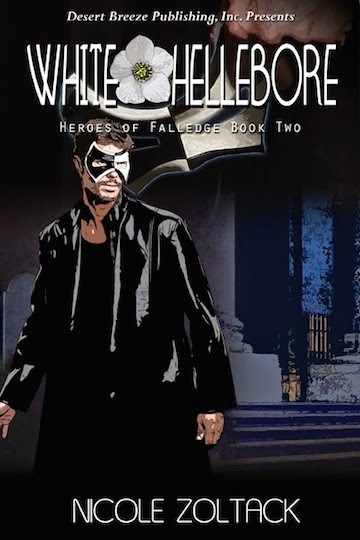 Tell us a little about your main characters.
Nicholas Adams is Falledge's superhero. With enhanced speed and senses, he can handle any super villain. Only this time around, he's pitted against two. His leading lady is Julianna Paige, Falledge's sheriff and the twin of his deceased high school sweetheart, Justina.

Remember those two super villains? One is a witch. And she brings Justina back. So not only does Nicholas have to deal with two super villains, he has two ladies he loves that he needs to save. And choose between.

In what ways do they change?
Nicholas is still getting used to settling down in Falledge after years of moving around more than dandelion seeds on a windy day. He wants to do everything he can for Falledge and that will never change, but he also wants to make complete with his past.

Julianna loves Nicholas and knows he loves her, but she also knows that a part of him will always love Justina too. And when Justina comes back from the dead, Julianna worries her love isn't enough for him.

Give us your favorite line from your protagonist.
Nicholas went to pick up a spicy tuna roll. His chopsticks squeezed too hard, and rice flew everywhere. Yet, none of the rice landed on the table. He'd plucked the kernels out of the air and shoved them into his mouth. "I prefer forks anyhow."
"You can't eat sushi with a fork."
"Watch me."

From an antagonist.
Hunter's new arm wasn't merely bone, but muscles and fiber and tissue and blood and skin.
Hunter, never a good dancer, had been told on several occasions he had two left feet.
Now he had two left arms.

An emblematic paragraph
Damn Hunter Walter. The scarecrow scientist had alternated between being aggravating and helpful during their takedown planning of Skull Krusher. Why couldn't scientists stay holed up in the laboratories, conducting safe experiments and not creating hazardous drugs?

What keeps you going when your inspiration flags?
I'm always going: writing one story, editing another, waiting for beta reader feedback. Often times, I'm at various stages of writing more than one story at once. If I'm stuck on one, I work on the other and that actually helps me to get unstuck on the first one.

What truly inspires you and fires up your vision?
Life in general. I'm inspired by so many things it might be easier to say what doesn't inspire me! People watching, dreams, TV shows, movies, other books, traveling down "what if" lane, reading scientific articles…

Best words of advice you ever received?
Never stop reading and writing.

Worst?
That you have to stay in one genre and establish yourself in it before daring to try another.

Some writing advice to aspiring and new authors?
Never stop learning and honing your writing craft. There's always something else to learn.

Which do you enjoy writing most: action, romance, setting, dialog?
Since almost every one of my stories has some romance aspect to it, I'd have to say romance first, but action is a close second. I guess I'm meant to write superhero romances!

How is it writing a trilogy? Biggest challenges? Fun aspects?
Writing a trilogy is both fun and challenging. I love that I only have to introduce the major characters in the first book and continue their arc in the second and third, that the readers already know and are invested in their story. The biggest challenge lies with making sure the characters both remain consistent throughout the trilogy but also undergo character growth throughout the trilogy too.

Share a hint of what’s to come in book three?
I'm liking the dual villain aspect. And there might be another love triangle. No mentioning any names though! :)

A hint of what you’re working on next?
I'm close to finishing Scarlet Magi, the last in the Heroes of Falledge trilogy. After that, who knows? :)

Nicole Zoltack loves to write in many genres, especially romance, whether fantasy, paranormal, or regency. When she’s not writing about knights, superheroes, or zombies, she loves to spend time with her loving husband and three energetic young boys. She enjoys riding horses (pretending they’re unicorns, of course!) and going to the PA Renaissance Faire, dressed in garb. She’ll read anything. Her current favorite TV show is The Walking Dead.
Posted by Catherine Stine at 9:10 PM