Idea City has a few great show and tells today.

First up: Twisted Earths is now on Goodreads! So you can totally put it on your TBR list. More on the collection in my last post.

Second up: Graeme Ing's Necromancer launches on August 23rd! Powerful cover, eh? So, if you're adding Twisted Earths to your TBR list, why not add Graeme's Necromancer too? 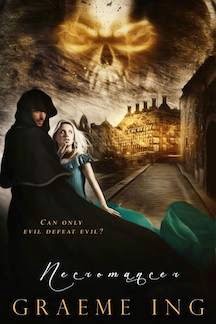 A primeval fiend is loose in the ancient metropolis of Malkandrah, intent on burning it to a wasteland. The city's leaders stand idly by and the sorcerers that once protected the people are long gone.

Maldren, a young necromancer, is the only person brave enough to stand against the creature. Instead of help from the Masters of his Guild, he is given a new apprentice. Why now, and why a girl? As they unravel the clues to defeating the fiend, they discover a secret society holding the future of the city in its grip. After betrayals and attempts on his life, Maldren has reason to suspect everyone he thought a friend, even the girl.

His last hope lies in an alliance with a depraved and murderous ghost, but how can he trust it? Its sinister past is intertwined in the lives of everyone he holds dear.
Can only evil defeat evil? 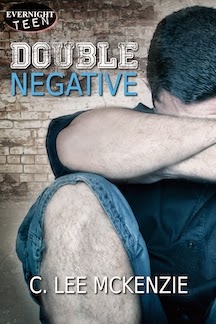 Third up, but just as important!: If you haven't uploaded C. Lee's Double Negative, a gritty teen novel from Evernight Teen, you can do it now! On Amazon

Here's a line from Hutch McQueen, the protagonist:
"My life was going, going, gone, and I hadn't been laid yet. I couldn't go into the slammer before that happened."

AND, we have outtakes from the novel! In C. Lee's own words:
I love to write description, but it seldom stays in the book. I think I write it for myself, really. Once it’s on the page, I can see where I am in the scene, and it’s easy for me to write the characters--what they see and where they move in the space I’ve created. Here are two pieces of description I liked, but that didn’t add much to the book, so they wound up on the cutting room floor.

1.
Liz sat at the back of the church not listening to the words, but focused on Tim Kerry’s voice, the way it rose and fell, spilling over the heads of the parishioners. She closed her eyes and imagined it caressing the quiet corners of the old stone building, an historical landmark that no longer quite held the swell of worshippers at Christmas, but was perfectly suited for the regular congregation. There’d be a new church across town in a few years, but this one would always be her favorite. Soaked with decades of incense, softened by the brush of uncountable hands and shoulders, its pews gleaming more from the slide of butts into place than the swipe of caretaker dust cloths, this church epitomized what her religion was all about.

Palm Street is in the back corner of Larkston and miles from Camilla Terrace, the upscale part of town. Palm Street is the place Hutch McQueen longs to escape. Here’s how I saw it, but it never made the final version.
2.
One dusty palm tree remained from the developer’s try at living up to the Palm Street name. Once, back in the eighty’s, palms grew in front of all the houses, and there were lawns and kids. Now, most of the front yards had defunct cars or recycling cans, and no one sat on the porches. The brightest features on any of the houses were the yellow bug lights. They were always on.

While I missed not having that description in the book, I still had it in my mind, so the setting that Hutch stepped into was very clear. I could write his reaction to it without ever including it for the reader. I let them imagine Palm Street in their own way.

What's at the top of your TBR list right now?
Posted by Catherine Stine at 6:18 AM