Untethered Realms, the speculative fiction author group I'm in has been cooking up a spooky new story anthology set to release around Halloween! My story is called A Strange Penitence. Here's a peek at the gorgeous cover! Even better, you can now put it on your Goodreads To-Be-Read list. 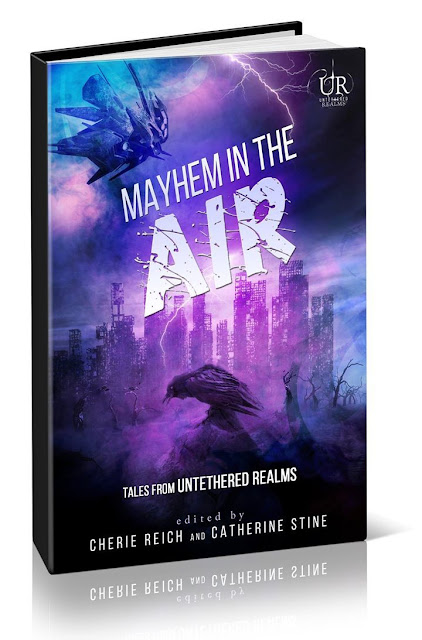 A Strange Penitence by Catherine Stine - A young artist pays a supernatural price when a drawing trip to North Carolina turns deadly.

Mass Transit by Graeme Ing - For Emily, mind over matter is not just a saying, but the gateway to her career among the largest starships built by man.

A Tangled Weave by River Fairchild - A TimePulse rips through the Great Tapestry of Life, leaving Earth’s history in a jumble, and Death and Chronos in a race to save the world yet again.

Corrosive by M. Pax - In a world ruined by pollutants, Bex sets off to establish a new homestead with her dreamy robotic man. Already farming her plot of land is another dreamy man with radical ideas, presenting new challenges as corrosive as the air.

Saving Scrooge: A Short Story Prequel to the Saving Marley Series by Gwen Gardner - Marley is sent from purgatory to save the soul of his old friend. Can he save his own in the bargain?

The Silent Wind by Christine Rains - A team of specialists must dispel a mysterious storm on an alien planet to prepare it for colonization. One by one the crew disappears until only a seasoned soldier remains. How can he battle a hungry wind that makes no noise?

Paper Lanterns by Cherie Reich: In order to keep his promise to his daughter, Mayor Alfred Merry must betray the woman he loves.

Chaos. Hope. Love. by Misha Gerrick - Although Eris is the goddess of chaos, her life has fallen into a nice and comfortable routine. Until someone from her past shows up in her bookstore.

Cardinal Sin by Julie Flanders: Beleaguered hospital workers bury the living with the dead in the midst of a tuberculosis epidemic and a seething spirit vows vengeance from the skies.

The Ark by Cathrina Constantine -Plagued with memory flashes of fiery explosions and running for her life, Fallon emerges from a drugged stupor to find herself in an airborne Ark, and the earth below is a drowning wasteland.

Posted by Catherine Stine at 7:32 AM