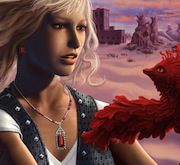 Ruby's launch party might be over but the announcement of the prize winners has just begun!

Jak C won an ebook or paperback of Ruby’s Fire

And now, the winner(s) of the most creative guess as to what that Red flying critter is..... drum roll please... ta dum!

Thank you all for Liking my new author page, and subscribing to my shiny, new newsletter. Or if you haven't yet, here's the link.

For anyone who won copies of Ruby, a review is certainly appreciated if you're inspired to. I'll give you virtual hugs and chocolate.
Also, stand by for the Apocalypse Blogfest coming up from July 13-20, where I'll be running another Rafflecopter that includes a bunch of bad*ss apocalyptic novels, including a signed copy of Rot and Ruin by Jonathan Maberry!

What hijinx have you all been up to during July?
Posted by Catherine Stine at 7:11 AM