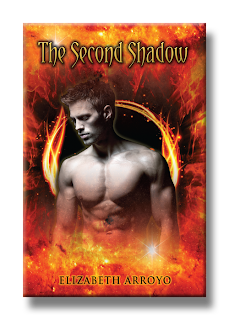 I'm back to blogging after a lovely, if short vacation. Today I'm helping celebrate the launch of Elizabeth Arroyo's new novel, The Second Shadow, out today with Sapphire Star. It is book 2 in her Second Sign series. Here's the lowdown on it:

Jake thought being demon meant a shredded humanity, stripped of all human emotion. Chaos and self-preservation dominates a demon’s instincts. But Jake feels every ounce of pain and despair around him.
And it’s driving him deeper into Hell.
Gabby’s choice to save him last summer left a fissure in Hell’s gate that released a malevolent evil. When Jake’s given a mission by the demons to shadow a human girl who may know the whereabouts of an ethereal weapon, he doesn’t expect to see Gabby. But Fate has her own agenda.
When Jake and Gabby are thrown together on a camping trip with a group of delinquent teens, Jake begins to grapple with the haunting choices he made in the past.  When the evil finds them, the group begins to battle for their lives, alliances are made, and truths revealed.
As the evil begins to influence Jake, he questions his link to the demons, his purpose, and his love for Gabby. But the answers to those questions are only found in Hell. And it may cost him his soul.

About the author:
Elizabeth has worked in the community for the bulk of her professional career. She enjoys quiet moments, action flicks, and dancing with her four-year-old.

Great, sizzling cover, and edgy plot, eh?
Posted by Catherine Stine at 8:59 AM