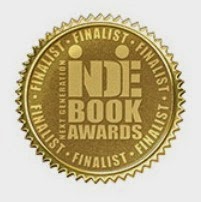 First of all, my futuristic thriller, Ruby's Fire is a YA finalist in the 2014 Next Generation Indie Book Awards! How cool is that? I get to attend an award party at the Harvard Club. It's the one year anniversary of Ruby's launch so I'm a proud book mama.

The other fun thing is that I'm going to sign at BEA (Book Expo) in NYC. I'll be at the Science Fiction Writers of America Booth 2561 (SFWA) on Thursday (11:30 am to 12) and Friday (3 to 3:30 pm) signing copies of Ruby's Fire and Fireseed One. And I'll also be at the Headline Booth, 2368 on Friday from 4 to 5 pm selling and signing Ruby's Fire with some of the other Next Generation award-winners.
Are you headed to BEA too?
If so, then heck, come see me!!! I love to meet my online friends and associates in person!

Haven't read Ruby's Fire yet? It's on sale at Amazon! ebook, illustrated paperback

If everything about you changes, what remains?

“Seventeen year-old Ruby and her little brother Thorn, have only known a life blighted by the extremist Fireseed Cult. The night Ruby is set to be claimed by one of its cruelest and oldest leaders, she makes a bid for freedom. With Thorn in tow, she stumbles into the world beyond, and finds an opportunity for a fresh start in Skull’s Wrath under the guidance of Nevada Pilgrim, a woman who may not be all she seems. Ruby's new life could bring her friendship, love, even fortune, but nothing comes without a price. Is Ruby's talent for elixirs keeping the roof over their heads, or do some of her associates have a more sinister and lucrative interest in them? Life outside a strange cult isn't without its dangers, and the experience leaves Ruby transformed and communing with the Fireseed more closely than she ever would have imagined. Stine delivers a thrilling adventure led by an exciting cast of characters, and the romance is well handled.”   -YA’s The Word

“Ruby's Fire is a novel of creativity and imagination. The worldbuilding is excellent, full of visuals and original concepts.” - Fluttereal Flight

“A heart-pounding tale of deception and danger set in a futuristic world teetering perilously between metamorphosis and destruction.”  -Ciara Knight, author of Weighted & Escapement

And for those in the Philly/Jersey/Delaware area who want to attend an amazing writing retreat, I'll be teaching a concentration of writing YA and NA at the Rosemont, PA writing retreat from June 22-27. Still time to sign up! The deets here!

I even have a little more news! Yup, after a long, cold winter it's a newsy spring. But I'll save that for my next post.
What are you up to this May and June?
Posted by Catherine Stine at 6:50 AM