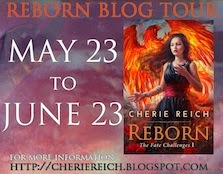 Idea City's thrilled to chat with Cherie Reich about writing and Reborn. Oh, and enter the Rafflecopter to win LOTS of great books from Cherie and other Untethered Realms authors!
Cherie, tell us about your main character.
Yssa is god-chosen as the Phoenix Prophetess. She’s grown up knowing who she is, but that doesn’t change how she wants to be normal, like everyone else. She’s sometimes naïve, self-centered, and wishy-washy, but she can be strong and caring. She genuinely does want to change people’s terrible Fates, even though she often fails.

In what ways does she change?
Yssa would rather be anyone besides the Phoenix Prophetess, but she must learn and grow to accept her role in Amora’s history. She can still be a little selfish at times, but she’s learning to be less naïve and more certain of herself.

Your favorite line from your protagonist:
My memories weren’t enough to take with me. I just wouldn’t go to Amora.

From an antagonist:
“Your queen is not all she seems.” Odjin half-heartedly laughed.

An emblematic, teaser paragraph:
The child’s life-thread ripped from his mother’s hand and joined the pulsing jewel on her belt. The piece sizzled, reattaching to the gemstone, and transformed to blood red.

What keeps you going when your inspiration flags?
Reading. I can always tell when I’m not reading enough since the writing goes downhill.

What truly inspires you and fires up your vision?
Daydreaming. I love thinking about future scenes, acting them in my head, and figuring out where to go next.

Best words of advice you ever received?
Write a draft and then put it aside for a while. Coming at a draft with fresh eyes really helps to find problems with the story.

Worst?
You must write every day. Every day works for some authors. I find I write best in spurts.

Advice to aspiring and new authors?
Read! In your genre, out of your genre. You’ll pick up ways to write by absorbing what you read.

Which do you enjoy writing most: action, romance, setting, dialog?
Good question. Can I say “world building”? It’s similar to setting, but I still feel like I have a hard time with description, but I love finding ways to delve deeper into the world the characters live in.

How is it writing a trilogy?
I’m still learning about writing a trilogy. Book One is finished and published, but I only have part of Book Two written, and Book Three is only an outline. The biggest challenge will likely be not dropping a story thread. I’m trying to tie everything up at the end, and I fear I’ll miss something. I do love building the world and learning more about the characters and the Kingdom of Amora as I write and plan.

What is the most important theme of book one? Book Two?
Accepting who you are is a strong theme in the books. Life and death is another as well as free will versus Fate.

Care to share a hint of what’s to come in book three?
Since Book Two isn’t out yet, I don’t want to give away too much. Let’s just say everything comes together in one epic conclusion.

A hint of what you’re working on next?
A princess must rise to challenge Fate. I’m expanding a short story within The Fate Challenges’ world to novella-length. The new title is Repledged, and it features Princess Magna and is set 800 years before Reborn. 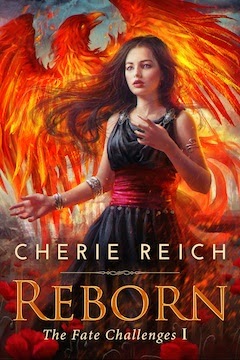 To save a kingdom, a prophetess must challenge Fate.

On the day of Yssa’s death and rebirth, the god Apenth chose her as the Phoenix Prophetess. Sea serpents and gods endanger the young prophetess’s journey and sour the omens. Yssa is cursed instead of blessed, and her duties at the Temple of Apenth prove it. She spends her days reading dusty scrolls, which does nothing to help her forget Tym, the boy back home. But the annoying yet gorgeous ferryman’s son Liam proves to be a distraction she can’t predict, even though he rarely leaves her alone for two sand grains.

Her boring temple life screeches to a halt when visions of her parents’ murders consume her. Yssa races across an ocean to stop the future. If she can’t change Fate, she’ll refuse to be the Phoenix Prophetess any longer. Fate, however, has other plans for her and the kingdom.

Yssa must either accept her destiny or fight to change Fate. 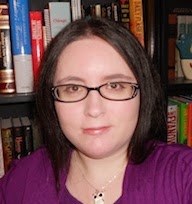 Cherie Reich, a self-proclaimed bookworm, is a speculative fiction writer and library assistant living in Virginia. Her short stories have appeared in magazines and anthologies, and her books include the horror collection Nightmare, a space fantasy novella collection titled Gravity, and the fantasy series The Foxwick Chronicles and The Fate Challenges. Reborn is her debut novel. She is Vice President of Valley Writers and a member of the Virginia Writers Club and Untethered Realms. For more info, visit her website.

Cherie and the authors of Untethered Realms are giving away over $50 worth of books to one lucky winner. The giveaway is open internationally. Enter the Rafflecopter below.

On an unrelated note, Catherine Stine signs at BEA this week! Click for the schedule.

a Rafflecopter giveaway
Posted by Catherine Stine at 9:03 PM