Calling all International fiction foodies! What's your fave foodie scene in a novel? 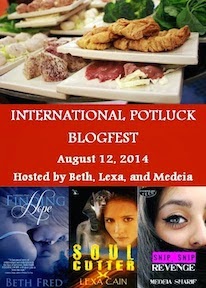 Today, Idea City joins Lexa, Medeia and Beth, the creators of the International Potluck Fest in talking about great foodie scenes in fiction! Oh, and there's a giveaway Rafflecopter. To enter it, check out one of the hosts' blogs.

One of the funniest foodie scenes I've read is in Wallbanger (18+), a rowdy romance, where the protag's love interest is always cooking. There's a love-fest after bread-making, where they're literally rolling in the flour. Since that's too steamy to post here, I'll tell you about a scene from my NA romance, Private Internship that launches on September 29.

Artist Sienna is interning for bad-boy sculptor, Caz Mason. He's a major handful, and is constantly testing her with strange games, but one of his enticing talents is that he's a great cook!
Here's a snippet that displays his canny wiles:

“Come up for air,” he advises. “I’ve got some special victuals and a game for later.” Victuals is a good old Chaucerian term for food, ha! I guess Caz has gone to college. But more worrisome games? Meh.

I breathe in the nutty steam of his gourmet coffee, and my mouth is watering at an earthy, spicy aroma that I can’t quite identify. Casper escorts me into the studio kitchen. He’s put on a lavender shirt that accentuates the molten tones in his hair. He motions me to one of the chairs and even pushes it in for me. This rebel knows some good manners. Tommy has set us up with actual cloth napkins, two large bowls, and silverware. Caz brings out a steaming pot of stew and ladles it into our bowls.

Joining me at the table, he sits forward in his chair instead of straddling it. “My own concoction,” he announces. “Pheasant chili.”

“What a treat.” I take an experimental bite. The flavor detonates in my mouth. “Man, this is great! Where’d you learn to cook?”

“From an old Texan migrant down in the Smokies.” Sounds dubious, but what do I know? I know that I appreciate a man who can cook. We gobble the food down. Something about hard physical labor—you work up quite an appetite.

Afterwards, Caz wipes his mouth with the napkin and clears his throat. “So, why don’t you bring in a few of your pieces tomorrow? I should know what my intern is doing.”

My pulse spikes. I’m partly flattered and partly terrified—especially after his scathing critique on that very first day. “You sure? I mean, it’s not about my work, it’s about your—”

“Be more sure of yourself,” he barks. “I can’t tolerate insecure people.”

I shrivel up inside. But he’s right. I need to be strong, be proud. “Okay, fine. Shall I continue shoveling sugar after lunch?”

“What game? Not so sure I want any more of those.”

Do you use food in some way in your writing? To set mood? Entice? Add a sense of reality? What's your fave fictional scene involving food?

Posted by Catherine Stine at 6:31 AM