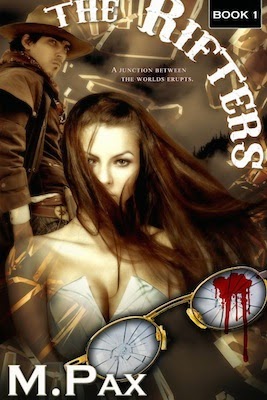 M. Pax has a spankin' new paranormal series just out! Book One is called The Rifters, and guess what? It's free on selected sites for a limited time! Here's the lowdown:

The Gold Rush trickles to a fool’s quest and a string of stagecoach heists. In 1888, Earl Blacke decides to make a new start and become a better man. He escapes into the mountains, heading north. In the wilds of Oregon, a rift inside an ancient volcano opens and sends him into the future, into the present day. It also shaves forty years off his age, forty years to live over again and atone for what he’s done.

Starting over is hard to do. In current day New York, Daelin Long’s dream job at a publishing house goes the way of the dinosaurs her sister chases. With no money and nowhere else to go, Daelin accepts the librarian position in her sister’s dinky town in the middle of Oregon. Nestled inside ancient volcanic peaks, the town of Settler holds onto many secrets. Residents roam the streets with weirdly fashioned devices, and odd lights pulse in the night skies. People whisper of a phantom outlaw and start dying, murdered and missing their heads. On top of it all, Daelin’s sister is missing, and Daelin doesn’t know who to trust.

Earl knows more than he’s saying. He shares a notorious history with the phantom, one he’ll see remains buried. Keeping Daelin’s sister’s secrets is his only chance at redemption, and the only way to keep this world safe.

And now for a short excerpt:
A woman in a long flowered dress hurried forward carrying a paintbrush. “Hello, hello.” She waved. “Excuse the mess. I’m renovating… again.” She laughed with little snorts, stumbling in a little circle, defying her years. She couldn’t be younger than forty. “Inside joke, man, sorry. What grooviness can I help you find? I know where everything is.” She gestured at the piles of castoff merchandise strewn about.

If not for the goose bumps on her goose bumps, Daelin would have left. “A winter coat? Earl Blacke mentioned you might have some.”

“Oh man! What a tragedy about him, huh?” She wore her amber hair in two braids, tied with twine and decorated with plastic flowers.

Tragedy? What had happened to Earl? Daelin clutched at her knotting stomach. “What do you mean?”

“There was a murder last night. Umm, wow. Didn’t you hear?” She set the paintbrush down on a plate that had been used for the purpose before. Bracelets covered her arms, clinking with her simple movements.

“In Settler?” Violent crime wasn’t what Daelin expected to hear. She didn’t know what she had expected, but not murder.

The thrift store woman leaned in closer, whispering in a conspiratorial tone. “Yeah, they’re saying Earl Blacke killed Susan Leeds. Took her head plum off, man. Only thing is…,” she glanced at the shadows then wet her lips, “her head is missing.” The soft scent of melon accompanied her words.
Earl had murdered somebody? Daelin gulped, getting a lungful of paint fumes. Right, the paint. The fumes had to be messing with her mind. “Are you serious?”

The Rifters is free at selected sites! The second book in the series, The Initiate, will be available October 20, & for preorder at a special price via iTunes, Amazon, and B&N. Check HERE for links. Giveaways & events ongoing through October 31. Check HERE for details. 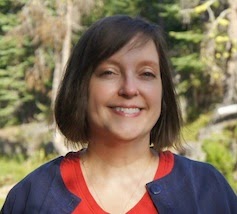 M. Pax is author of the space adventure series The Backworlds, plus other novels and short stories. Fantasy, science fiction, and the weird beckons to her, and she blames Oregon, a source of endless inspiration. She docents at Pine Mountain Observatory in the summers as a star guide, has a cat with a crush on Mr. Spock, and is slightly obsessed with Jane Austen. Learn more at mpaxauthor.com.

Posted by Catherine Stine at 6:17 AM