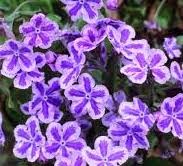 It's spring, would you even know it?! I took a walk in the park down the street and saw cute snowdrop bulbs peeking through. On a similar note, many great books have recently popped through the proverbial soil. I'm posting some of these "supernatural book blossoms" that fit right into a spring thaw.

Some have mini-interviews. Oh, and here's a pix of me with my own new Art of Love box set. Even better than spring flowers.

Christine Rains' urban fantasy Of Blood and Sorrow is out. Can't wait to read it!
Erin Driscol works the perfect job consoling fellow demons by feeding off their grief at Putzkammer & Sons Funeral Home.

When fledgling vampire Nicolas Reese comes to Erin for help, she learns the truth behind the legends and hides him from his sire and the vampire hunters who seek him. But when the Putzkammers begin to die one by one, Erin is caught between her act of kindness and the need to save her adopted family. Only by facing her own personal demons can she stop the slaughter and still rescue Nicolas from his dark fate.

Shop for Of Blood & Sorrow at Amazon, B&N, Kobo, Smashie 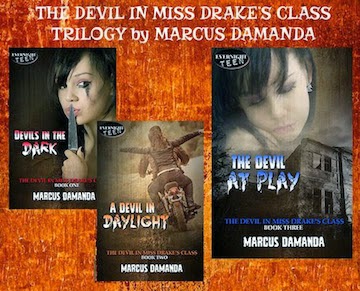 Marcus Damanda has all three out in his horror trilogy, The Devil in Miss Drake’s Class. Here's what he says about book 2:

Audrey Bales returns as the main character. She’s much stronger than the girl who attempted suicide in DEVILS IN THE DARK, and fully invested in her continuing recovery as she “reboots” life at a new school. However, her nemesis from the first book, Maggie Lassiter, also returns, fresh out of juvenile detention and burning with the desire to sabotage Audrey’s new beginning. In this book, we also meet Jack Maddox, a classmate of Audrey’s. He likes her very much, and has plans of his own.

What is their biggest challenge or quest?
Audrey’s greatest hurdle, as the book begins, is to make new friendships in a strange place without the safeguards she was given at the psychiatric ward. As the book progresses, she has to weather a storm caused by others—two competing forces, both evil, one of which wants to destroy her, and the other that wants to “save” her in the worst way imaginable.

Give us your favorite line from your protagonist
“Life reboots today.”

From an antagonist:
From Maggie: “See, Mom? This is how my game is played.”
From Jack: “Mr. Downing, you’ve got happy pants. How inappropriate.”

Since bad advice is often funnier than good advice, what was the worst advice ever?

From my video store boss when I told him I was finishing my teaching degree: “Why? Another year or two here, and I can see you becoming a real retail guy.”

Krya Dune writes paranormal fantasy & has multiple novels. She says:
My recent release is Bonded, a YA Paranormal Romance, and the first Dual Realm Novel. These books will be part of a standalone series set in the same world, meaning they can be read in any order. But each novel will be told from a different character's point of view.

Tell us a little about your main characters:
In the Dual Realm novels, another realm (or dimension) co-exists alongside our own. Trey, the main character in Bonded, is from this other realm. He is a young man trying to escape a troubled past. After running to our world, he meets Sarah, a sixteen year old whose brother ran afoul of a local gang. Her brother's disappearance has left Sarah as a target for the gang leader.

Your favorite line from your protagonist:
“Because it was easier to not care. But I was only fooling myself. I did care. I loved her and losing her the way I did...it almost killed me.”

From an antagonist:
“You don’t speak unless it’s to tell me what I want to hear.”

Best words of advice?
No matter how hard it gets, always chase your dreams. Never give up.  My father taught me that.

Angela Brown's urban fantasy dystopian is Beacon. A summary:
Tsunamis reduced the USA into a shell of itself, called The Fold. Surviving humans and vampires joined forces to form The Colony, where registered citizens do as they're told.

They donate blood quarterly and dream of being chosen as Attendees for the Jubilee celebrations, that is, everyone except Macie Breen. With high school graduation near, she’s anxious to ditch the rules in hopes of starting a new life with Thane, an unregistered and also her best friend.

Her hopes fizzle when Macie is selected as an Attendee, forever registered. Any future with Thane…impossible. Being chosen comes with another unexpected price.

Truths about The Colony blaze into ashes and lies when she discovers the vampires haven't kept their part of the bargain. Worst still, Macie’s life unravels as her stint in the city of Bliss forces her to face daunting truths about who, and what, she really is.

Shop for Beacon at Amazon, B&N

C Lee McKenzie's Timelock Disaster, the sequel to Alligators Overhead is out! If you're in the market for fun middle grade adventure (gift it to one of the kids!), take a look.
Becoming a wizard is hard work. For Pete Riley it’s almost impossible. He tries to follow the rules, but he’s impatient and being impatient only leads to trouble. Big trouble. He messes with a time spell when he shouldn’t and he and his bookish friend, Weasel, are swept into Victorian England, where they will be trapped forever if that wizard-in-training can’t find a way to reverse his bad spell by the next full moon.
Shop for C Lee's YA and MG books at Amazon & B&N

What magical book "blossoms" have you read lately? Do you have your own special book coming out soon?

Posted by Catherine Stine at 4:53 AM