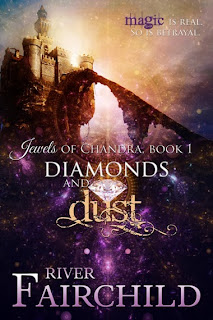 Today Idea City is giving a sneak peek of River Fairchild's Diamond and Dust. Lush, gorgeous cover, eh? Here's a blurb:
Magic is real. So is betrayal.
Two heirs. A Kingdom of dust on a troubled world. One might resurrect it. One might destroy it all.
Archaeologist David Alexander investigates the cave where his father disappeared and hurtles into another world, one filled with magic and bizarre creatures. The mad ravings in his father's journals of icemen and dragons may not be fantasies after all.
Convinced his father may still be alive, David begins a treacherous journey to find him and discover a way home. Along the way, he encounters a few unlikely friends. A Dreean warrior, a beautiful thief and a satyr join him as he searches.
David's arrival into this new world sets off an explosive chain reaction of events. Faced with powerful adversaries and few clues, he may not get the chance to rescue his father before disaster strikes, condemning both of them to death. Or worse.

The novel comes out on December 9th, but it's available now for pre-order! Find it here: Apple, B&N, Kobo

On another note, catch Graeme Ing's hilarious take on the bookstore of 2015 here.

And get ready to play some super-fun games at The Realms Faire, which starts this coming Monday! The grand prizes include a kindle and a fat bundle of ebooks!
Posted by Catherine Stine at 6:16 AM