The Hundred Fall of the Wents, Jen Prescott's new fantasy, plus giveaway! 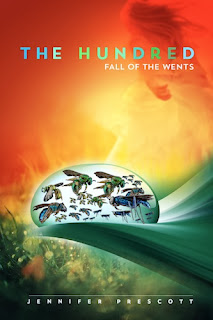 Today Idea City is thrilled to present Jennifer Prescott's wildly creative fantasy for older kids and teens, The Hundred Fall of the Wents! She's giving away one ebook to the person who has the funniest, or most compelling answer to why they love fantasy! Post your answer in the comments below. Here's a brief intro:
Millions of years in the Earth’s future, humans have long vanished from the planet. Evolution has produced a host of wondrous and intelligent beings: shape-shifting Fantastic Grouts with globes of light atop their skulls; creatures descended from flowers; and massive swarms of bees that can bore perfect holes through metal or bone.
But some seek a way to bring the humans back into the world—a world filled with creatures like twelve-year-old Tully, a young, amphibious Eft who imagines humans as nothing more than old bones and fairy stories. When his beloved guardian is stolen by a menacing black shadow, Tully must embark on a journey to a cruel, northern land to save her and his entire species. In an adventure that blends time travel, magic, and science, Tully learns whom he can trust, and who will betray him—for the price of reawakening the Hundred.

To purchase a print or Kindle edition on Amazon
On Goodreads, including a giveaway through 11/30!

Jennifer has been writing since the age of 6, when she produced hand-printed and illustrated originals and sold them door-to-door at the neighbors’ houses. She earned her MA in Creative Writing from the University of New Hampshire, where she won the Tom Williams Prize for a collection of short stories. Her fiction and nonfiction have been published in various magazines, and she was recently featured in the anthology Summer’s Edge. The Hundred: Fall of the Wents is the first book in a planned trilogy for young readers.
And now, why do you love fantasy?

Posted by Catherine Stine at 6:39 AM