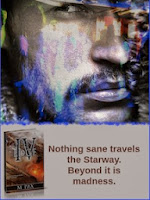 I can't say enough great things about M Pax's space opera series, The Backworlds. Having read two in the series, I can say that her characters, especially Craze, are vivid and amusing. Her plotting is creative and the voices are original. M Pax's mind just keeps cooking up wilder and wilder sagas. I'm a total fan! With the release of book 4, Beyond the Edge, she's sharing a rare treat: two mini-excerpts! But first, a book 4 blurb:
Some truths are better left unfound.
For two years Craze’s dear friend, Lepsi, has been missing. The murmurings of a haunted spaceship might be a message and may mean his old pal isn’t dead. The possibility spurs Craze and Captain Talos to travel to uncharted worlds, searching. Out there, in an unfamiliar region of the galaxy beyond the Backworlds, they stumble upon a terrible truth.
Meanwhile, Rainly remains on Pardeep Station as acting planetlord, dealing with the discovery of her lover’s dark and brutal past. Alone and questioning her judgment, her introspection unlocks more than heartache. Latent protocols in her cybernetics activate, forcing her to face a sinister secret of her own.
In the far future, humanity settles the stars, bioengineering its descendents to survive in a harsh universe. This is the fourth book in the science fiction series, The Backworlds. A space opera adventure. 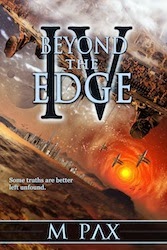 And now for the excerpts:
1.    His father stiffened, the knot on his brow tightening. “You talk so damn much, I don’t follow the half of it. Nobody does, which is why you’ll always be slime on the bottom of my shoe.”
Craze didn’t blink, circling his pa. “You not wearin’ shoes.”
Snarling, Bast huffed out a fierce growl. “The point is I’m pretty sure I heard an insult, ‘n I’ll chance a stay in jail to knock my brand of justice into your head..” Backing up, he wiped his feet in the dust, then started forward like an all-terrainer tricked out with a ship’s engine, howling, waving the club so that it whistled.

2.    “We’ll be with him lickety-split. This being a tree makes everything easier.” Pauder grinned, adjusting his guns and bandoliers.
Inching his way out the door and onto the ramp, Craze tested the ground with a toe, tapping under the clouds for solidity. He found firm footing and joined the insane expedition, staring at Pauder’s unwavering arrogant expression for reassurance. He cleared his throat, unable to resist asking, “How does it make anythin’ easier?”
“Trees is less dangerous ta climb than cliffs. Bark forgives, rock doesn’t.” Pauder floated through the thick fog, his legs hidden. His movements appeared effortless and poetic, not the motions of one on a hunting excursion with every intent of killing whatever stood in his way.
“That makes no sense. Both land you on your ass, ‘n I’ve yet to see forgivin’ ground. Which is a worry since we still can’t see shit.” One wrong step and there was no telling how far Craze would fall.

Inspiring the words she writes, M Pax spends her summers as a star guide at Pine Mountain Observatory in stunning Central Oregon where she lives with the Husband Unit and two demanding cats. She writes science fiction and fantasy mostly. Visit her at:
Website / FB / Twitter / Goodreads / Pinterest / Wattpad

Posted by Catherine Stine at 7:33 AM